Adapted from an interview conducted by Dave Healey, with his kind permission. 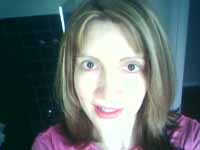 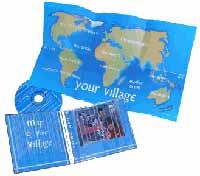 The CD can be obtained from iTunes or from The Unmutual Website Village Shop and you can visit Carmel's website at http://www.carmelmorris.com

DH: How did you become interested in The Prisoner and what inspired the musical celebration of the series we have here?

CM: Everyone else at school watched Neighbours, I watched Dr Who. I loved the music, of course written by Ron Grainer, another Australian. I stumbled across videos of The Prisoner in a video shop in the late'80s and noticed Ron Grainer's name for the music. Liking all things diverse, I borrowed a few tapes and became enmeshed in the series. Time had muddied the memory of The Prisoner but not for long. During these early days, I was getting my children's books published and they were selling well - books about making paper planes and dinosaurs, as well as stereogram stuff. The time came for me to travel to the UK to see my London publisher and do some publicity. My friend and writing colleague, Kate Cummings, was to travel with me and suggested we visit Portmeirion. That name rang a bell, and it turned out Kate was also a Prisoner fan. I always wanted to visit the village but never had the time, even after living in the UK for nine months, some years earlier. We had booked three nights and when we arrived at the village, the hotel porter guided our car through the village to park behind Salutation, where we were staying. I gave a familiar salute to a day-tripper not amused at having to step aside for a vehicle. I guess I'm rambling on a bit, but we have been returning to stay in the village nearly every year since, one stay lasting two weeks! Watching The Prisoner again was a real gem, as it aired every night in the village. Then we went back to Australia to find it airing on cable! It inspired me to write a sequel to a kid's fiction I already had published by Scholastic, but alas they thought it was too weird. Writing a musical tribute, however, has been very rewarding - forget the money - the project has taught me a lot! One of the obvious inspirations for the album is the relevance of The Prisoner today. Many of us are aware of society impinging on our rights - rights which are subtly being eroded by government and corporations - but there are so many levels to The Prisoner that they all cannot be contained in one album.

DH: When did you begin the project and what problems have you encountered along the way?

CM: I began the project early last year when I couldn't get Ron Grainer's theme out of my head. My mind was adding a beat to it, a twist in the melody, sound effects and so on. I had already been successfully selling my music for technology audio visuals and writing small time pieces for local bands. I also used to sing lead in a metal band - but that's long ago! With a new interpretation of Grainer's theme rattling through my cerebrum, I just had to get the notes down on paper. I wound up writing something almost completely
different - but with the feel of The Prisoner. I sent an mp3 to another fan and he liked it enough to put it on his website. His words were encouraging so I began to write more tracks. About then, an independent record label showed interest but I am sure many out there know that following such a course can be a real headache. Throwing caution to the wind and rovers, I thought, why not? I shall jolly well do an album homage to The Prisoner on my own. I have not slept since! I also discovered the huge talent out there already, talent that has produced many a tribute to The Prisoner.

DH: Although predominently instrumental a few tracks do have formal lyrics. Do these have special significance?

CM: They just came into play when I was writing the tune. With the album, I did not want to take any sample from the original series. The melodies may have some familiar tones to incidental music in the series, but I wanted to write something fresh. Obviously I could not provide an entire album of obscure pieces so I began to write a couple with lyrics. I purposefully avoided doing an entire album with vocals, as I felt it would detract from the overall `feel' of The Prisoner - and often more emotive messages can be given through instrumental pieces. One vocal track, "I'll BCNU", pretty well covers "The Prisoner" and life in the village. It's jolly but subtly menacing in the chorus and I think that kind of music suits The Prisoner well. I had a special friend (Erica Crocker) sing the lead for me while I did the backing (her voice was more suitable for this track) and the quality of the song is excellent.

DH: How did David Nettheim become involved in the album?

CM: My travelling friend, Kate Cummings, knew David from university days, and also knew Clive James. I was introduced to both and amazed by their talent. Clive wrote many excellent lyrics for performer Pete Atkin and to a degree I guess, inspired me to write lyrics for "Another Number". David has that cultivated charm that was to make an excellent voice for the album. I met David two years ago when he came to Kate's place for dinner. I hadn't realised how many television and stage productions he had been in. He had acted alongside Peter Wyngarde, Anton Rogers (both Number 2's in "The Prisoner") and also played roles in "Elizabeth R" and "Dr Who". It was only when we were in the village in 1999 I found out David was the doctor in "The Schizoid Man". Not a huge part I know, but significant! When I was writing the track, "Danse Macabre", I originally sampled the radio broadcast Number 6 was listening to until encountered by Number 2. I forget where the original quotation came from. Having decided to get serious about an album, I did not want to use any samples. I then had the idea to get David Nettheim to do the quote for me. Not wanting to risk copyright infringment for quoting word-for-word, I decided to write an original broadcast and 'turn it around', i.e. give an opposite message to the one Number 6 listened to. It worked well for the song, David was more than pleased to do the vocal takes in my home studio. He came over with a bottle of wine, which we drank during a thunder storm and blackout, and sat chatting in complete darkness waiting for the power to come back on, then got down to the voice takes - he spoke via the now empty bottle to give the effect of distance and hollowness, to which my engineer enhanced in the main recording studio. He would not have a bar of payment for his services - a true gentleman.

DH: Who designed the cover? The barcodes are an interesting device to use on the sleeve. Some of the numerical codes are obvious, others are a little cryptic. Are you going to let us in on the secret?

CM: I designed the artwork in my spare time (I used to be a graphic artist before turning into a computer geek), but the artwork went through several evolutionary stages, as I wasn't happy with this or that. A friend told me just to get on with it and print it - but I was not satisfied until it was just right. I thought I was being original with the bar codes, but I have since discovered CD covers out there using bar codes in the design - not so much as prison bars the way I designed them, but used as a 'message' nonetheless. A recent David Bowie album with a neat bar code design was shown to me only yesterday. As for concealed messages, "that would be telling" - I'll leave that to diehards. I'm not giving any clues away! Really, some of them are pretty obvious. Alistair Sadgitt will have a field day with this cover, I'm sure!

DH: Do you have any other musical ambitions now that this project has finally reached fruition?

CM: Rest - I need rest - in the village? I have quite a few tracks that didn't make it on this album and maybe a sequel will be in production down the track. I had a real battle of a choice between the Falling Out tracks - there was an alternative I could have put in - but then time and budget would not permit!

Some of Carmel's artwork can be seen HERE.