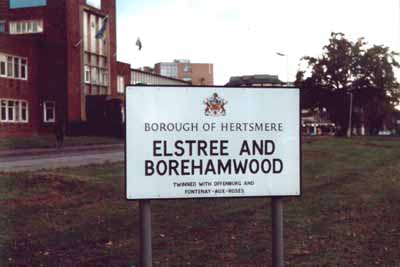 In the 1960s, which saw the heyday of action adventure TV shows in the UK, principally as a result of Lew Grade's ITC, the Borehamwood/Elstree area was a thriving centre for feature film production with many studios situated within its boundaries. These included of course MGM, whose massive soundstages were home to not only The Prisoner but also landmark epics such 2001 A Space Odyssey.

While feature films often had budgets which enabled location work to be shot around the world, most TV shows could not justify such extravagance. As a result small screen film crews would scour Borehamwood for suitable backdrops in add flavour to their productions. Borehamwood and its immediate area would be utilised for all manner of exotic locations in order to keep production budgets under control.

The Prisoner was somewhat different as it had an unusually long location shoot in Portmeirion. However, it was back to Borehamwood for many of the non-'Village' linking sequences, and these are included on various pages of this Locations Guide.

The huge MGM backlot played host to several Prisoner scenes, including the town of Harmony, the town of Witchwood from "The Girl Who Was Death" as well as the Recreation Hall area from several episodes and the "French Street" from "A, B, and C" and Kandersfeld in "Do Not Forsake".

Thanks to Roger Garrod, here is a photo of the 'Harmony' set (more details about the set can be found below). 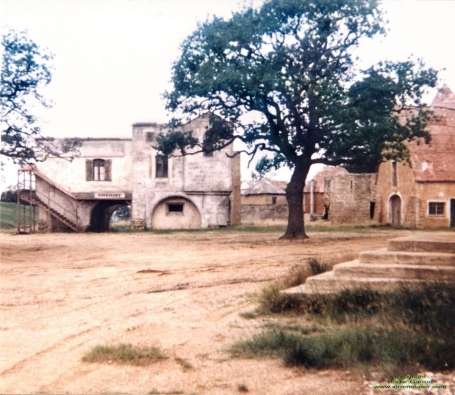 Also thanks to Roger, here is the 'A. B. and C. set seen most famously in the film 'The Dirty Dozen'. 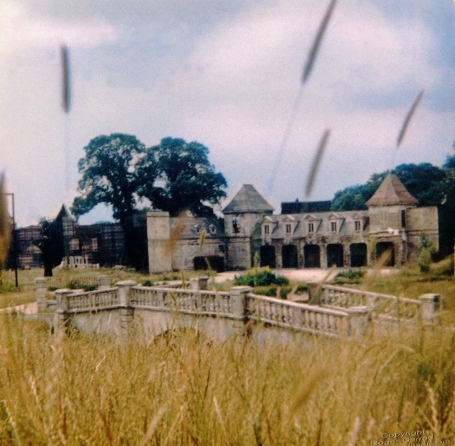 Here is a photo of part of the "Harmony" set, taken on location by "Prisoner" music editor Eric Mival (prints of this image are on sale HERE); 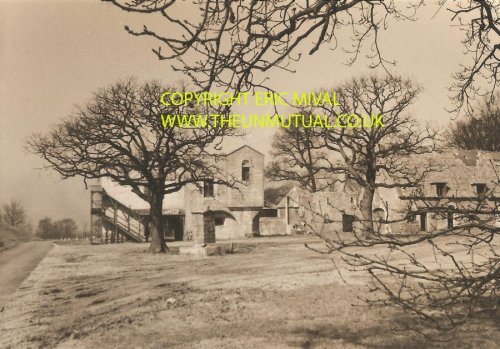 Click http://www2.tv-ark.org.uk/bbcone/1950s_continuity.html for footage of presenters David Vine and Eddie Waring doing a trailer for 'It's a Knockout' in the 1960s from the above location.

The backlot was a mixture of sets and streets, such as this. 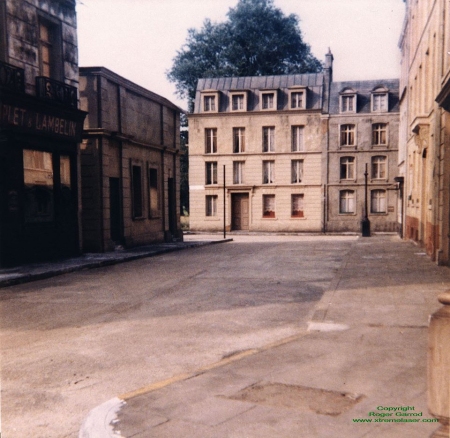 It was also home to the famous 'Where Eagles Dare' castle set! 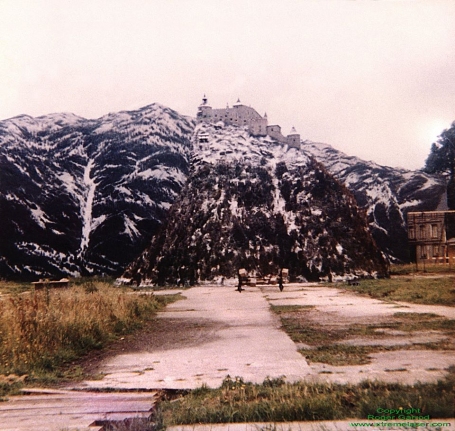 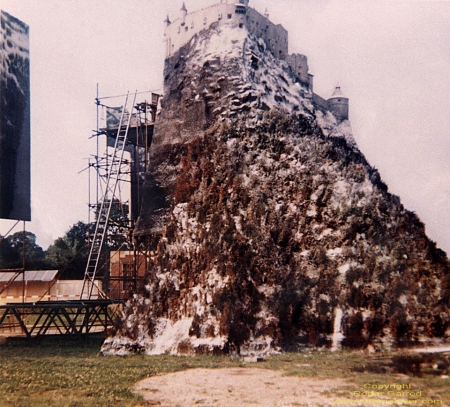 The backlot itself made way for housing estate some years ago, after being demolished in 1974. Below are some images of the backlot during demolition, thanks to Gary Kent who visited the site at this time (click thumbnail for full image). 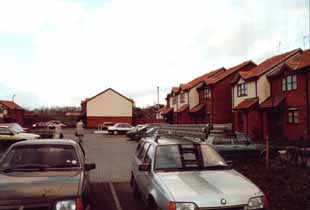 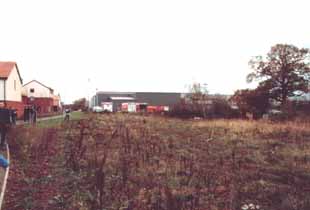 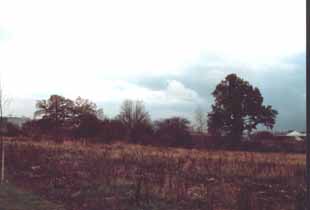 Over the years, there has been much discussion regarding the location of the tree seen in the centre of the western village of Harmony from the "Prisoner" episode "Living in Harmony", in which Number Six is fed hallucinatory drugs. There are several large trees in the estate, and for years debates have arisen as to which one, if any, is the one seen in the episode (from which Kathy's brother is hanged). Finally, in July 2012, the debate was laid to rest thanks to excellent detective work from Kieran McAleer and the members of the MGM Borehamwood memories Facebook Group, who have pin-pointed the exact location of the Harmony set including the infamous tree. These images show the then and now perspectives of the Harmony set; 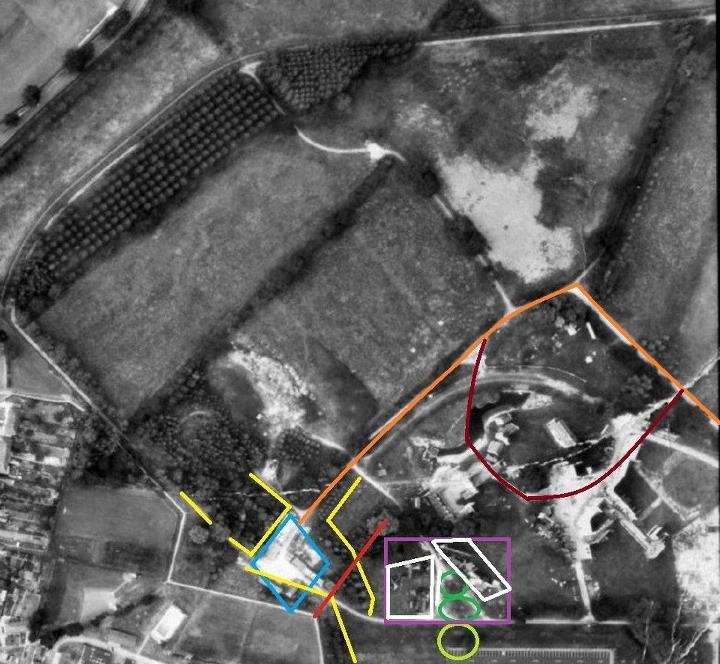 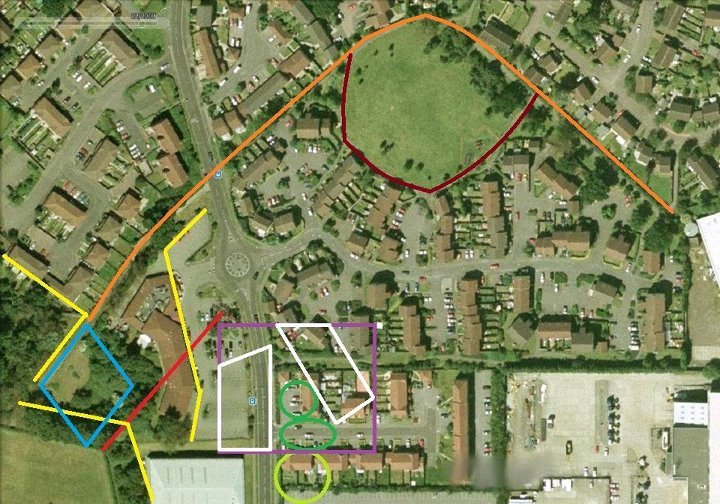 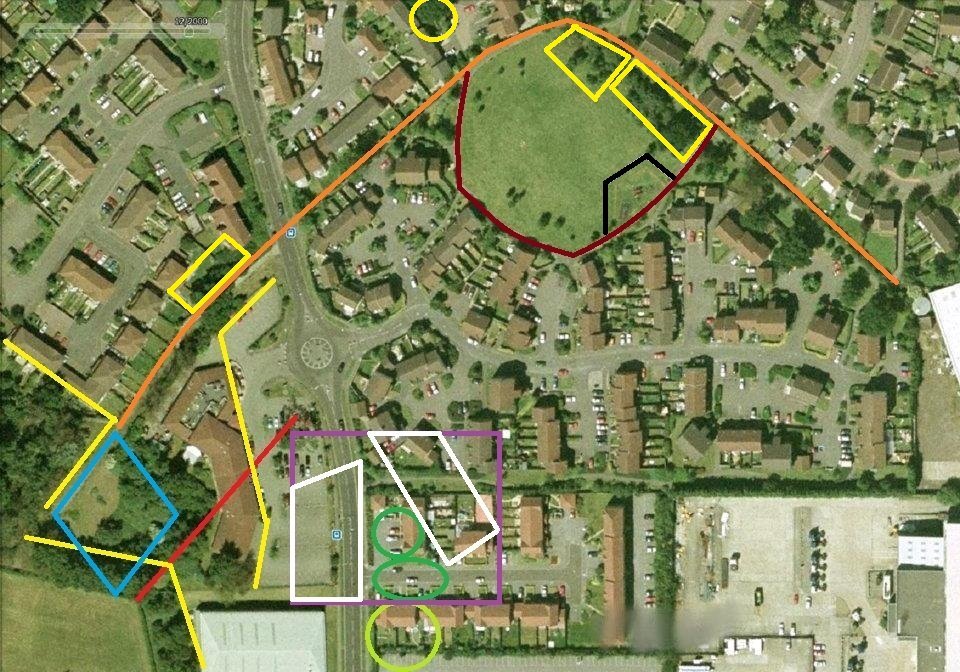 Kieran has also done some extensive research into other areas of the MGM backlot. He writes with reference to the following 2 images; "The yellow lines show the boundaries of the fields which the lot previously existed on. It's remarkable how the planners used as much of the existing hard-standing from the lot, to make the roads and street of the new estate. It's like the lot still exists, but for real... The green triangle, shows where the they built the second water tank, for the, "Where Eagles Dare" set. Even this was utilised, and is now hard-standing for cars. Ignore the green line, top right." 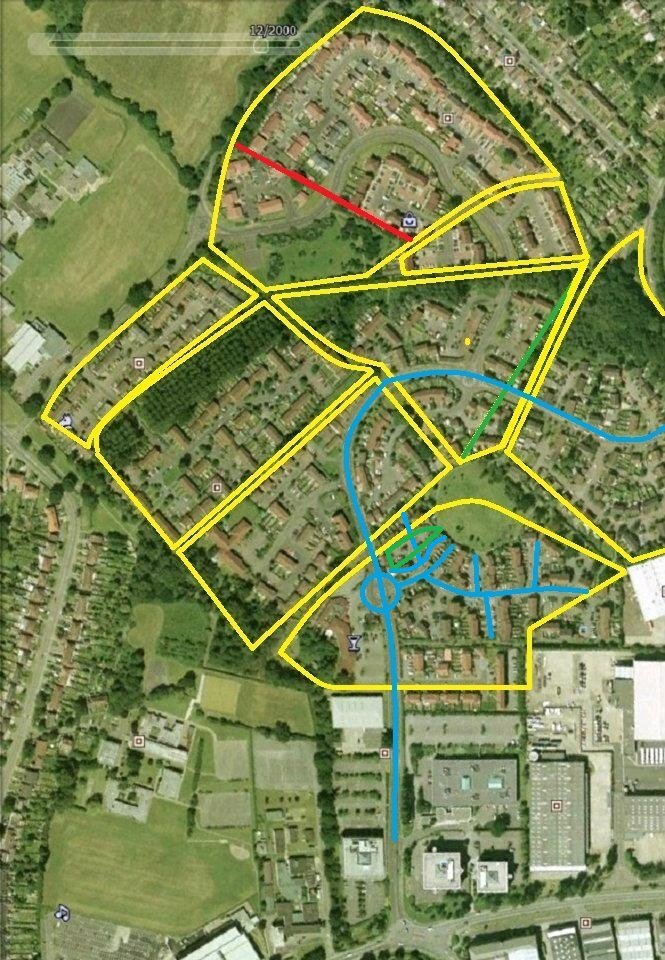 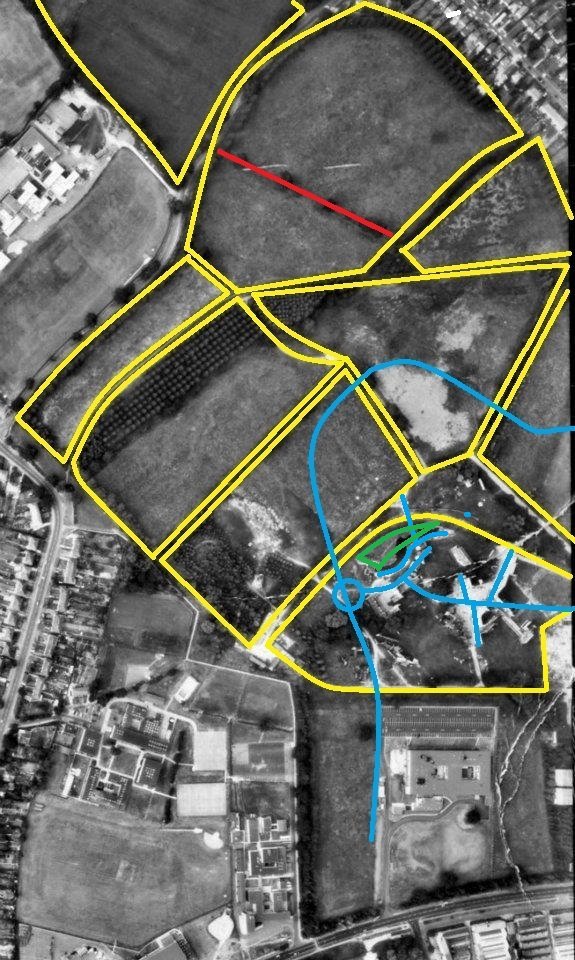 The following image is from 1985 and shows Studio Way cutting through what was the Harmony set; 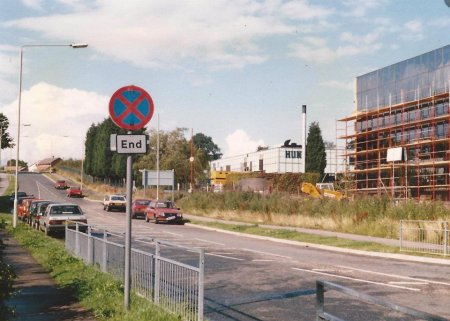 For a special page all about the ongoing discussions related to the location of the "Harmony Tree", click HERE. Below are a few more "then and now" (this time from on the ground) shots from "Living in harmony" scenes;

Here are two more "then and now" comparisons, again from Kieran, showing the "French Street" from "A, B, and C" and "The Girl Who Was Death" (also seen in other shows and films such as "UFO"). 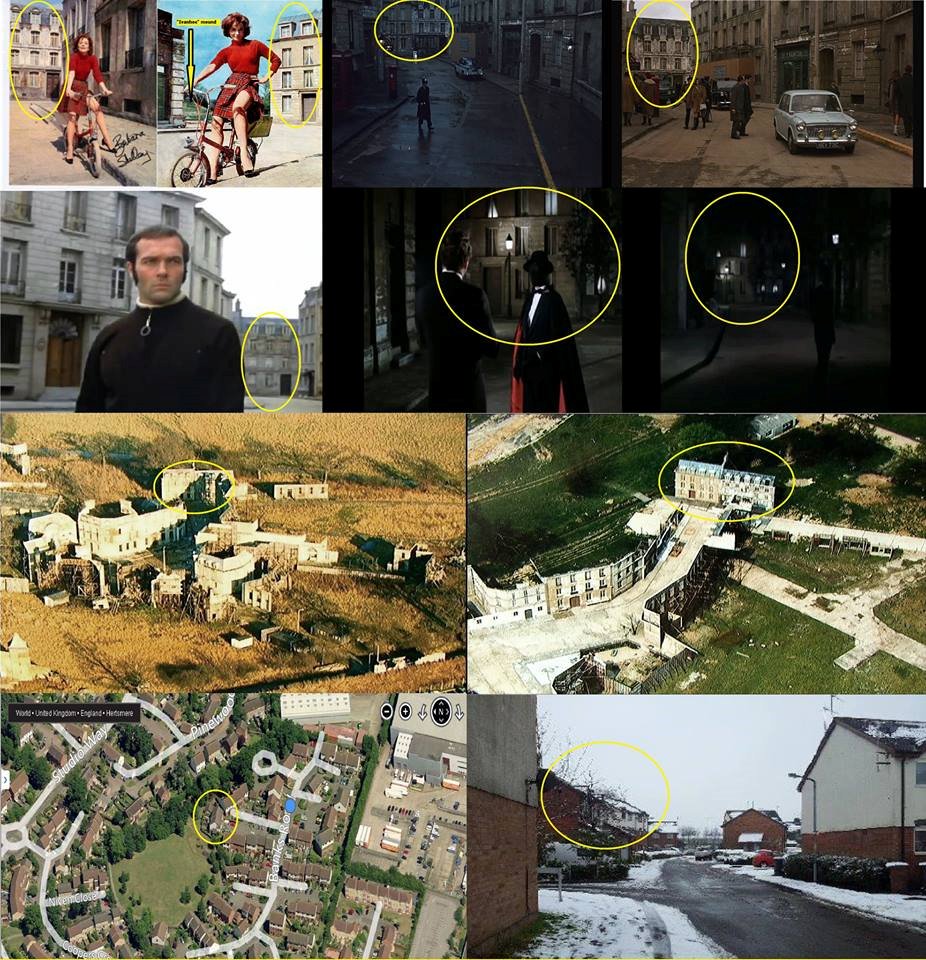 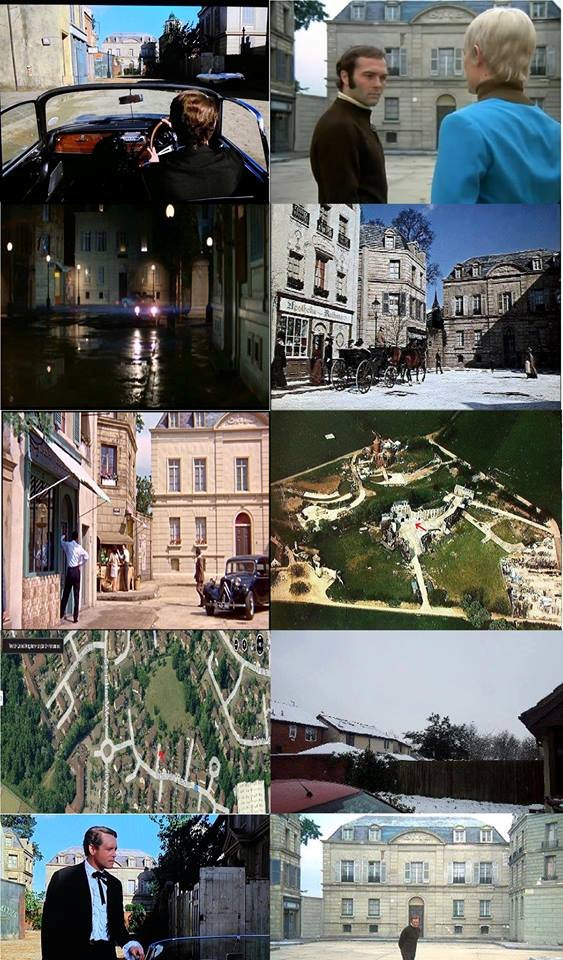 A lot of the exterior sequences were of course filmed at MGM studios, particularly the latter episodes shot where it was only possible to film a few pickup shots in Portmeirion (in March 1967). One such scene is in the episode "Hammer Into Anvil" where a walking Number Six is pounced upon by some heavies arriving in a Mini Moke taxi and then taken to see Patrick Cargill's sadistic Number Two. Thanks to Kieran McAleer again,the below two shots represent the "now and then" location of the fight scene! 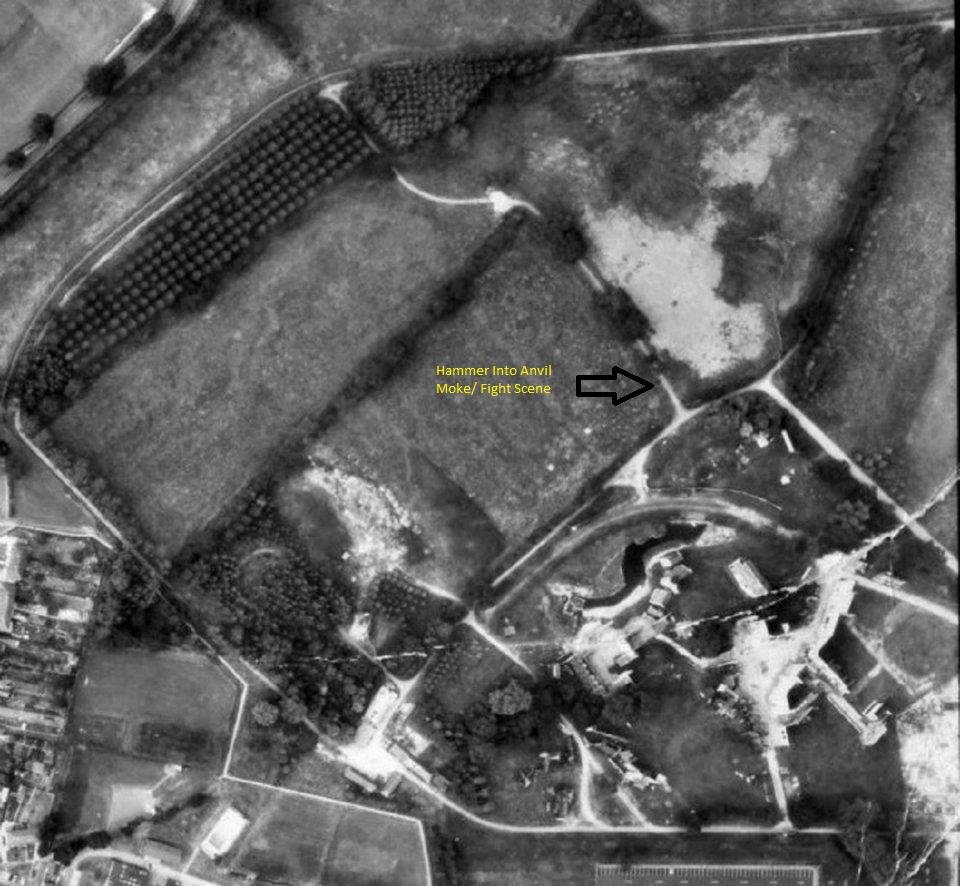 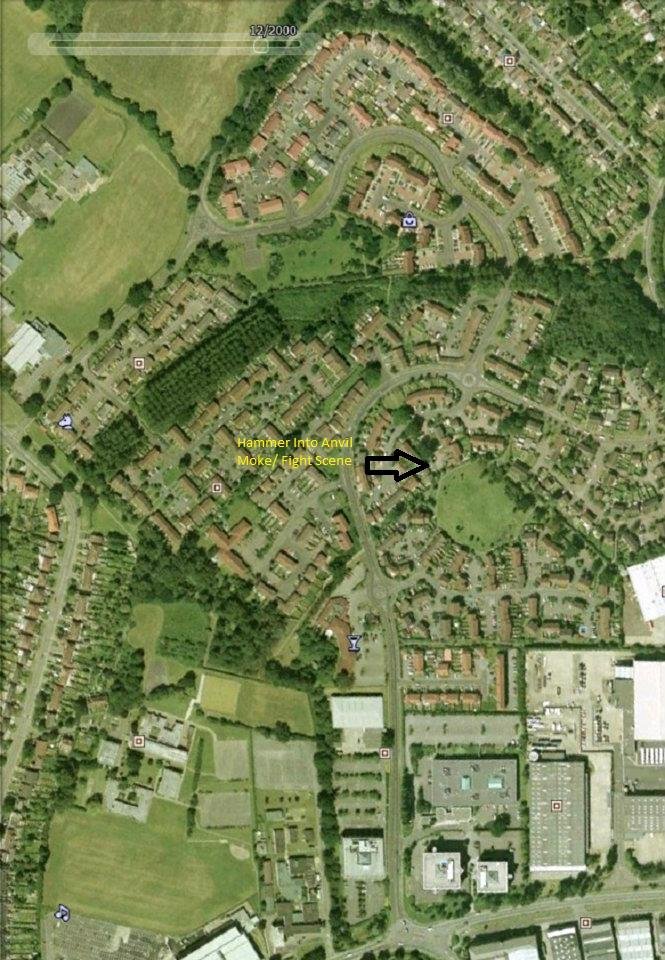 From an on-ground persepective, here is the same location (then and now);

Another "Hammer Into Anvil" location filmed on the backlot is where Number Six releases the pigeon, and that site also still exists today as another of Kieran's "then and now" photos illustrates; 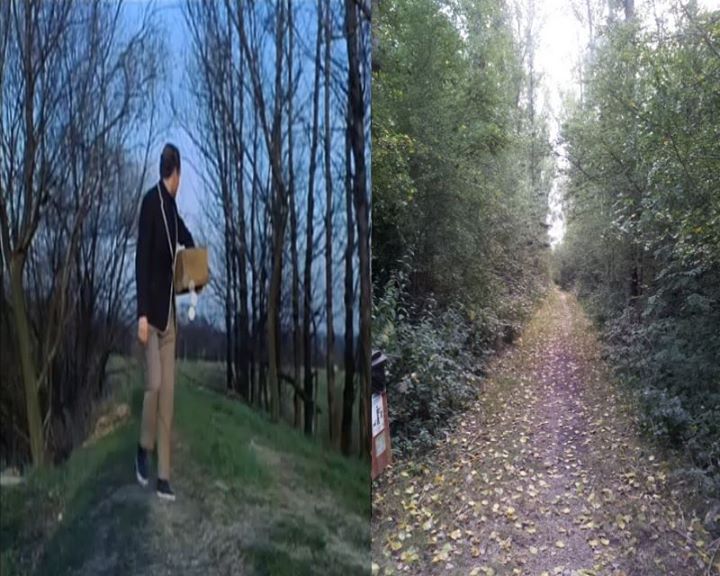 Here is a lovely transition video showing the changes to the Harmony location: http://www.youtube.com/watch?v=Zcm8ZBsr9uo

"Harmony" as "Prisoner" fans know it was actually built for a film called "Eye of the Devil", with the backlot being built as a double for the film's location sequences filmed in France. Thanks to Avengerland, we can see below the similarities between the buildings. Writes Tony McKay;

"In September 1965 work started at MGM British Studios on an adaptation of Robin Estridge’s Day of the Arrow to be called simply 13. The film was to star Kim Novac and David Niven. Location filming took place during September at the Château de Hautefort in the Dordogne department of southwestern France. In October the cast were back in Borhamwood filming at the studios. In November the title of the movie had been changed to THE EYE OF THE DEVIL. In December Kim Novac left the project to be replaced by Deborah Kerr which entailed a further seven weeks of filming including a week at Hautefort. The production was completed in early February 1966. The film was released in July 1966. Château de Hautefort represents the fictional Castle Bellenac which overlooks the town of Bellenac. In the film, an annual ‘Festival de 13 Jouas’ is celebrated in the square by the church and the whole town attends. For the film, although the festival is established in the actual town of Hautefort, the rest of the action takes place on the backlot at Borehamwood. Art director Elliot Scott based his design for the Borehamwood version of Bellenac on Hautefort itself and the architecture other towns in the region. Some of his design includes faithful recreations of sections of actual buildings. This backlot version of Bellenac would stand in Borehamwood until the site was redeveloped in 1973." 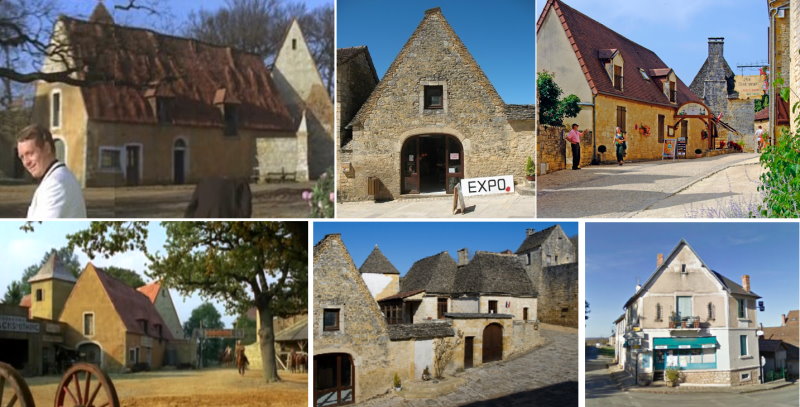 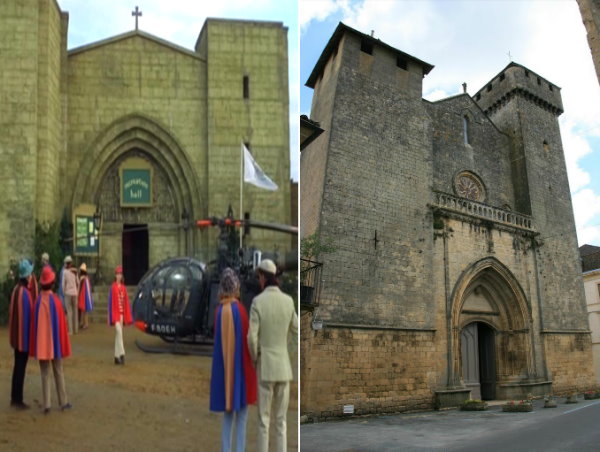 Borehamwood as a film production centre is a mere shadow of its glory days with many of the studios no longer in operation. Indeed, during the visit when the following photos were taken demolition work was being carried out. On this occasion it was a sad sight to witness the destruction of the once proud soundstages of ABPC Studios. The studios can be seen briefly over McGoohan's shoulder as he talks to Potter at the shoe shine stand in "The Girl Who Was Death". Interestingly, the film crew parked a van in front of the studio sign so as not to give screen time to a rival studio. The video HERE from British Pathe shows the Street in earlier years. 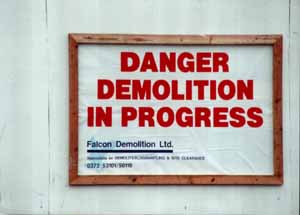 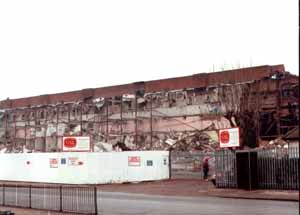 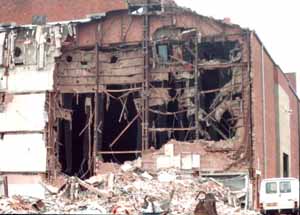