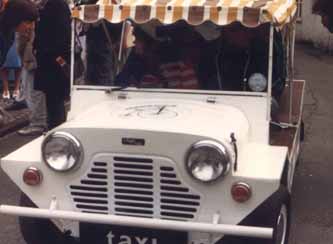 IN THE PRISONER: The Village Taxi - "local service only".

IN REALITY: The Moke (meaning "Donkey") was conceived in 1959 by Sir Alec Issigonis to meet the needs of the British army and went through various incarnations until 1963. It was developed on the back of the highly successful Austin Mini and the Morris Mini-Minor. With an original 848cc power train, BMC developed a revolutionry 4x4 version which used two engines, one at the front as normal and a second at the rear.

A limited production of 600 dual-engined Mokes still failed to win over the British army, as the main failing was lack of ground clearance and this dogged all versions of the Mini Moke. The twinni-Moke with 1696cc had great acceleration and hill climbing and a 1-in-2 gradient being perfectly feasible driving terrain for the light weight vehicle. With two gear sticks the twinni-moke was, at best, "fun" to drive, however later experiments in 4x4 used the traditional single engine in 1966. 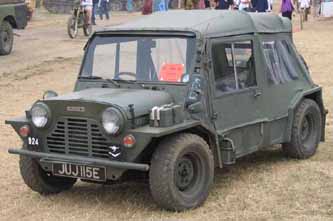 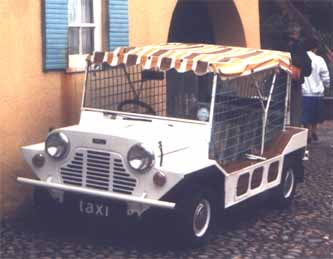 In 1963 BMC launched a civilian version of the Moke, which became available for purchase in 1964 in both Austin and Morris versions. In 4 years 14,518 were made. When UK production ended in 1967, the Moke cost £413. All mokes were sold as single seat cars with the "optional extras" three seats and grab handles (vital for passengers as the cornering ability of the Moke is incredible and seat belts were not fitted to cars at the time).

In 1968 production moved to Austrialia and at the same time the design was changed slightly with an improved 1100cc engine, galvanised body, and 13” wheels (which do not fit the wheel arches!). Austrialian production continued until 1982, when the Moke returned to European soil – this time in Portugal. In 1991 production moved for the final time to Italy and was produced by the motorcycle group “Cagiva”. Designs exist for a sports 2-seater version with lift off hardtop roof and drop headlights. 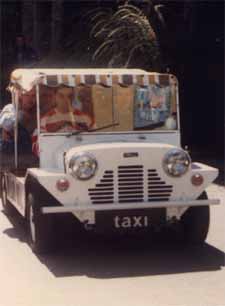 The Moke became a 60s icon and appeared in many programmes in addition to "The Prisoner", such as “The Persuaders”, “The Avengers”, “Tiny The Giraffe”, and “UFO”, as well as films such as “Crossplot”, “Catch us if You Can”, “Twinky” and several Bond films including “The Man with the Golden Gun” and “Moonraker”.

4 Mokes were used in the making of The Prisoner, and only one is known to definitely survive. It is seen during various sequences in 'Arrival' (including much of the taxi tour, and the beach escape) and at the end of the episode "Living in Harmony" without the taxi sign, displaying instead its numberplate of HLT 709C. In 2011 a Prisoner-liveried Mini Moke bearing the same plate was discovered in Holland (full story HERE) and has since been auctioned for £13,750. A discussion on the Mini Moke forum can also be found HERE. 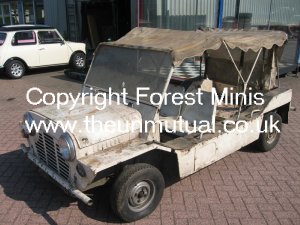 The winners of the auction were fans Phil Caunt and Jeremy Guy, and in September 2017 at Network's 'Fall In' 50th anniversary event in Portmeirion (review HERE), the newly restored vehicle was unveiled. 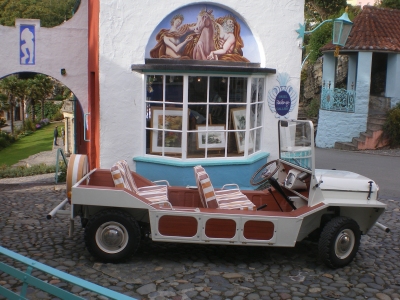 Phil Caunt handled the restoration himself (click HERE for a news article on this), with many original features, including the engine and bonnet decal, still intact. 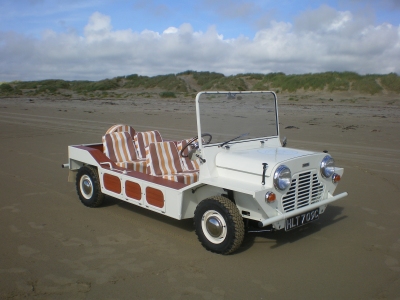 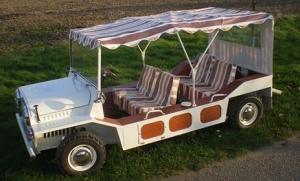 Another Moke CFC916C is also thought to have been used in the series as it appeared in promotional images for Captain Scarlet (below) having been converted at short notice when they ran short of Mokes for filming in Portmeirion. The three others, including HLT 709C, were used from the beginning of production. 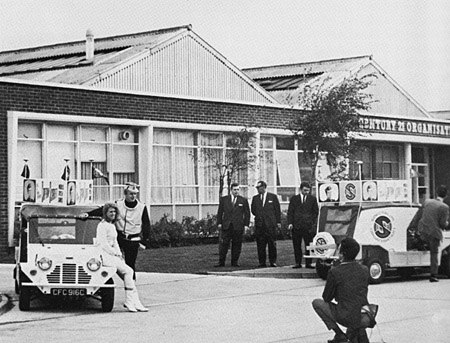 For many years CFC 916C it was owned by the former owner of Portmeirion's Prisoner Shop and was displayed in battery Square (see images above). Whereabouts is now USA, having been rebuilt after being damaged after falling off of a transporter.

As if TV and film wasn’t enough, the Moke was even the subject of a record (unfortunately not a big hit) with the catchy chorus of “We’re no jokes we’re little Mini-Mokes”. The album from which the song was included was called "Sing a song of Motor Cars". Sung by Jill Adamson & Mary Elaine in 1970.

In 2013 it was announced that the Moke was to be relaunched. After 20 years since production stopped on the original vehicle, Michael Young has designed what is called the "Classic Moke" for China-based Chery Motors. The new design has also been compared to the Volteis car from France (details HERE). Click HERE for more details of the launch, which was photographed by Bob Gunton; 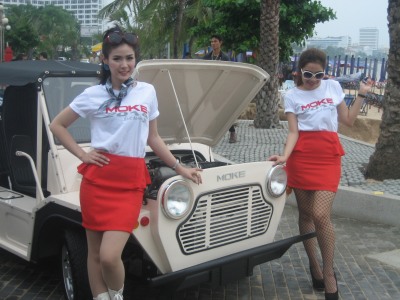 The Dinky Mini Moke (Dinky Car 106) was one of the few merchandise items available at the time of the original showing of the series, and a good condition boxed example can fetch several hundred pounds at auction today. 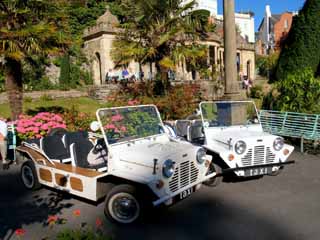 TUW reader Brian of Canada (who also owns and runs a Westfield 7) is currently restoring a Mini Moke, using CFC 916C as the basis for his 'design'; 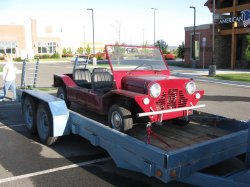 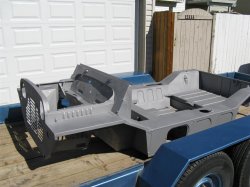 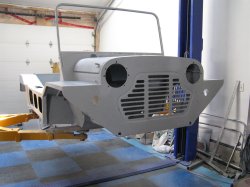 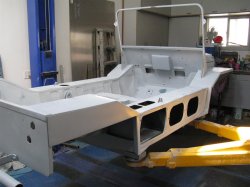 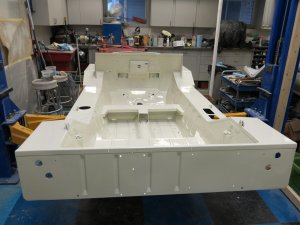 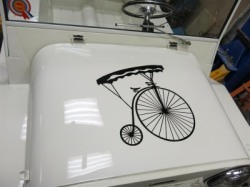 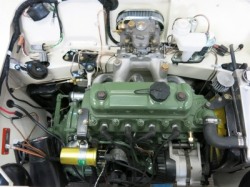 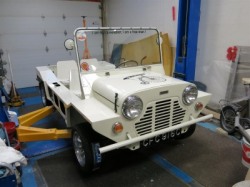 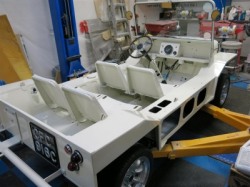 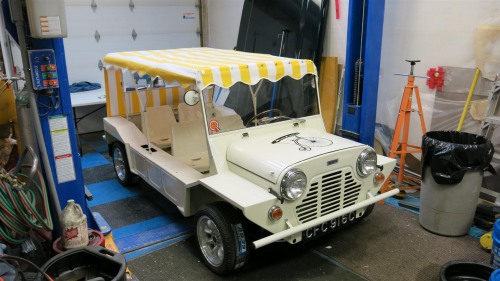 And now in July 2014 as it nears completion: 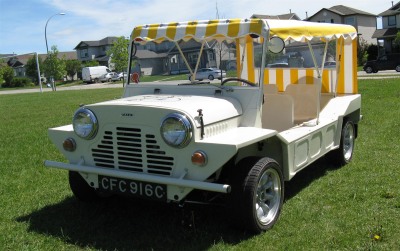 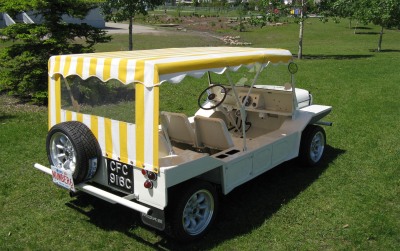 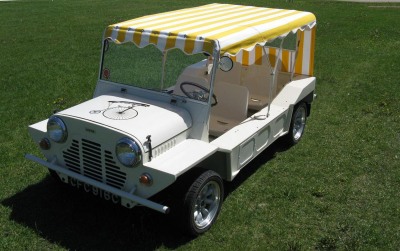