Controversy has struck the Cult TV and Sci-fi magazine Infinity' and, as such, a growing number of readers, writers, and advertisers are boycotting the magazine. 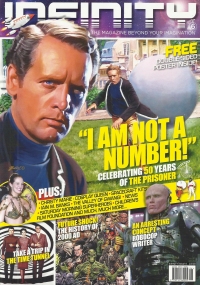 The magazine has a history of racism, mysogyny, and plagiarism and in the summer of 2020, the situation reached a new peak.

Previous editorials and responses to readers' letters had already raised eyebrows, including attacks on the use of female and BAME actors on TV being supported by the editor. 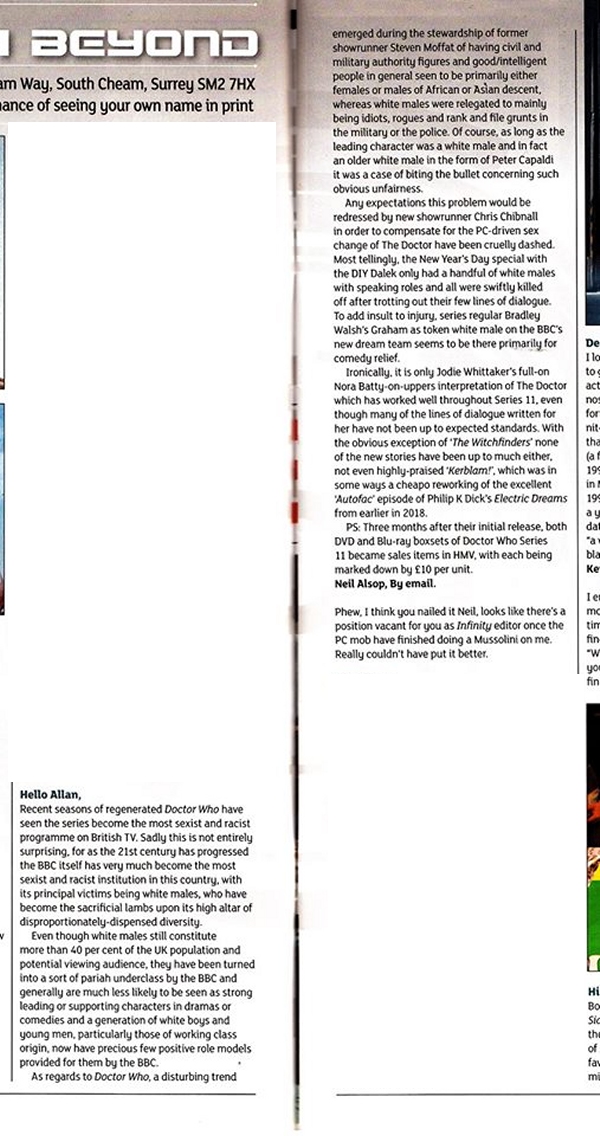 Even an obituary to Honor Blackman went Trump-inspired, with this unnecessary coverage of COVID-19 written by editor Allan Bryce as 'The Chinese Lurgi'.

The following issue's editorial then went on a rant about how using such a phrase was not offensive. Quite why a supposed film/TV magazine needs to have such editorials is anyone's guess.

Sadly, such behaviour will always attract support from the very lowest-minded people in society, and subsequent issues featured letters such as the following, which supported such Trump-esque racism. 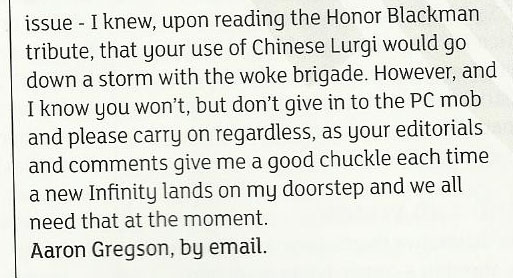 Interestingly, no 'negative' letters sent to the editor have been printed, and TUW was unable to find a single article or letter written for the magazine in its history by a female, despite the fact that TV and Sci-Fi fandom has many women within it.

This all came hot on the heels of the news that 'Infinity' have been reproducing people's photographs, and written work, without permission, for some time.

This includes a recent article on Worzel Gummidge' copied almost wholesale from a book without even acknowledgement to the true author (as evidenced by the book author writing the following on the online Roobarb forum).

One regular contributor to the magazine was The Unmutual Website owner Rick Davy, who wrote about 'The Prisoner', and 'Catweazle' and conducted interviews with stars of stage and screen. Rick wrote to Infinity editor Bryce requesting for permission to be sought before using fan-owned photos (which Bryce had taken from Google) to accompany his article on 'Catweazle'. The astonishing reply received from the editor was: we don't worry about such trivialities.

One reader contacted TUW to say that they recognised scans of his own comics in the magazine, as he recognised the imperfections/marks on the scanned pages, yet no attribution/source was offered, just wholesale reproduction of the scans.

Another magazine, produced by the same company and with the same editor, called 'The Dark Side' has a long history of alleged copyright theft, with a website set up in its early days cataloguing all the issues (as you'll see from that website HERE there are almost too many to count).

In June 2020 another furore occurred related to the magazine.

On June 18th editor Allan Bryce posted on the magazine's Facebook page what can only be described as a 1970s-inspired rant, described by one reader on Twitter as a tone-deaf response to #BlackLivesMatter'. 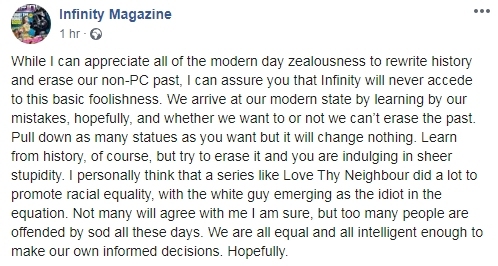 Dozens of polite comments (many of which are shown further down this page) from concerned readers and contributors were posted opposing the rant', or simply questioning whether or not a sci-fi mag should be posting about such matters (one never sees posts like the above on SFX's social media platforms, for example) but most were deleted, with the individuals blocked from the page for daring to give their view (something to which the editor admitted).

The editor then posted that these people, many of whom rightly stated they would not be buying any future issues, would not be missed'. The post was eventually deleted and replaced with others which gave a misleading view of what happened (ironic that a plea to not erase history' from an editor purporting to defend free speech then saw him delete the entire thread when the conversation did not go his way), mentioning Benny Hill (which as you see, above, was not the subject of the original post). Comic artist Lew Stringer's accurate response received responses from others, which were deleted, and Stringer's comment itself was later deleted. 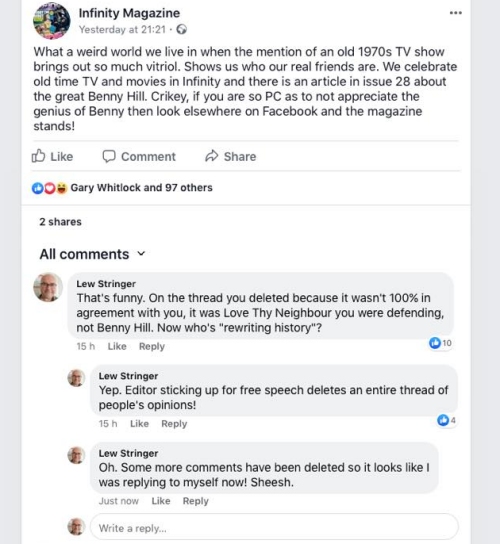 Polite comments, including this one from editor Allan Bryce's own daughter, were posted, on the subsequent discussions. Most comments agreeing with his daughter's view - that Bryce's views did not belong in the 21st century - were deleted.

His daughter was then informed that comments were being deleted, and thus stifling the education she wanted her father to receive. Bryce then claimed to his daughter that the deleted comments were 'personal attacks'.

Here are some screenshots of some of the comments which were deleted, which according to Bryce/Infinity were 'personal attacks', but which in reality were perfectly polite posts.

Even the post alerting his daughter to the fact that comments were being removed was deleted. One wonders about the morals of a magazine editor who would mislead his own family, and how he will explain to his daughter how a comment she directly read, replied to, and answered was also deleted.

Interestingly, many comments in support of Bryce/Infinity were NOT deleted, regardless of how abusive they were, although the following vile example was thankfully deleted (but only after a delay of several days, rather than the hours it took to delete the opposing views/comments).

When a friend of Bryce sensibly suggested some pages of the magazine could be dedicated to BAME content, the following response, which may be typical of the readership , was posted. It seems that out-dated and offensive views are widespread.

Due to all of the above, TUW would like to assure its rightly-concerned readers that the key tenets of The Prisoner' series - that all individuals within society have equal value, and that freedom of speech and right to reply to objectionable diktats are basic rights - and that the work/copyright of others should be respected - are respected by this website and that TUW and its owner Rick Davy will not be purchasing, promoting or contributing to the magazine in future. The Unmutual Website feels that the beliefs espoused by Infinity and its editor do not align with the ethos of the website, 'The Prisoner', or the website's partners.

A social media meme has been created by one person who took part in the conversation (and had his comments deleted) for anyone wishing to join the 'boycott' of the magazine and post this whenever they see the magazine being mentioned. 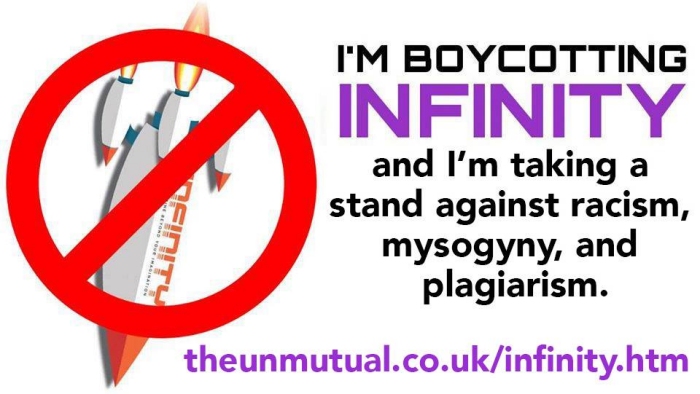