IN THE PRISONER: This location is the first (and last) to be seen in The Prisoner, and shows McGoohan driving his Lotus down a deserted runway. It can be seen at the beginning of the main title sequence, and at the end of "Fall Out".

IN REALITY: There has been much discussion over the years as to the real-life location of the runway, but we now as of February 2009 and since have undisputed proof that it is Podington Raceway in Northamptonshire (AKA Santa Pod). 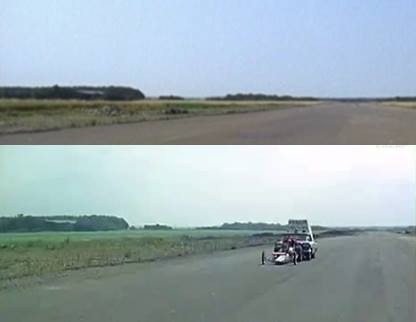 LOCATION REPORT: There have been at least 4 candidates for being the real-life location of the "Prisoner Runway" over the years. After investigations from Anthony McKay of Avengerland and the members of the Brit Movie forum (see the discussion page and photo evidence HERE) it is now without doubt the Santa Pod raceway in Northamptonshire, Podington Raceway (also named by Assistant Director Gino Marotta in 1993).

Thanks to Anthony some wonderful overlay shots have been created between the opening sequence of The Prisoner, and a recently unearthed Pathe Newsreel film of drag racing at the venue in the late 1960s.

The top image below is split into two frames. The upper frame is the opening shot of The Prisoner, and underneath Pathe footage from Podington the same year. As you can see, the two locations are totally identical.

As you can see, the backgrounds/features are identical in both films. Case closed.

In addition, in 2017 as part of their 'Many Happy Returns' location feature on their official 50th anniversary BluRay and DVD sets, Network Distributing visited and filmed at the location and were shown to the exact spot where filming had happened over 50 years previously.

Previous to these investigations a communication from Unmutual reader Martin Goldthorpe led us to believe it to be Radlett (Handley Page) Airfield. Mr Goldthorpe told us: "Many years ago I was "reliably" informed by Graham Arnold, who was the Sales Director of Lotus Cars at the time the Prisoner was filmed, that the runway was at the old Handley Page factory at Frogmore. It was actually called Radlett Airfield. Unfortunately, Graham died recently."

Opened in 1929 as a grass aerodrome for Handley Page Civil Aircraft, the runway was extended in 1939 to enable production of Halifax bombers. Most of the towers, hangers and runways were demolished in the 1970s after the Company went bankrupt. The M25 Motorway now stands on much of the site, with Redland Aggregates now owning what's left. The photographs on this page date from shortly before demolition of much of the site. 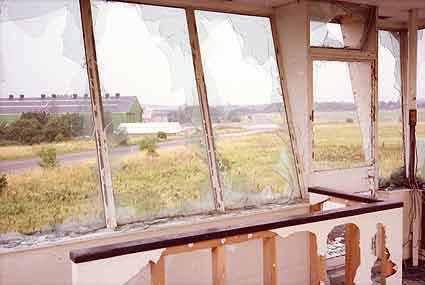 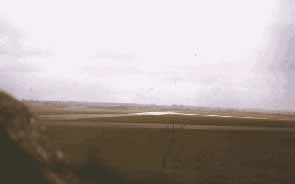 Other candidates for the runway were Hethel Aerodrome, near Wyndonham in Norfolk, which is the Lotus testing track. However, comparitive photographs have shown that the vegetation is vastly different to that shown in The Prisoner, and Lotus did not move their operations from Cheshunt to Hethel until late 1967 (after the runway sequences would have been shot). Some have suggested Elstree Aerodrome, which is located near to the MGM studios where much of the series was filmed, but the runway seems too short (and crowded with hangers and out-buildings) to have been used.

In August 2006, Jeff Morgan contacted the website to offer another possibility, that of Bovingdon in Hertfordshire. He writes: "Looking at the photos at THIS WEBSITE which despite its name makes reference to The Prisoner, I have photos I have taken in 1973 that shows a similar view but these were taken at Bovingdon in Hertfordshire. Also I have a book that also shows a similar view. I have provided a couple of links to the photo in the book and one of my photos HERE. My photo is looking across the runway but clearly shows one tree in the centre of the wood that is higher than the rest as does the photo taken from The Prisoner.". However, as the top images of Poddington show, it is not any other location.

With additional thanks to Robert Truman of http://www.controltowers.co.uk for permission to use the Radlett images, and for the additional information.