Almost one entire year of preparation works and now everything's over. In a way this isn't
right is it?

An unimpressive community hall in the northern part of the University town Giessen was the venue to celebrate the British TV series known here as NUMMER 6. Giessen can be called the epicentre of the of the German PRISONER continuum. Two of the nine organisers of "nr6de" are Giessen residents. Another two of the team are residents of the same state. So that's why it all was happening here. 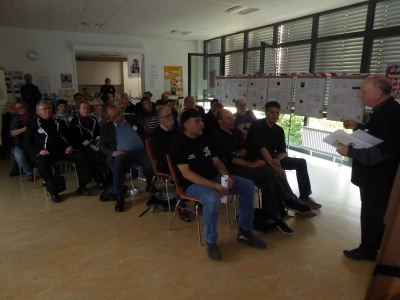 Doors opened at 11:00 and everything was still bustling, the work of setting it all up had not yet been completed. You'd walk inside under a striped canopy and past a huge display showing aerial photos of Portmeirion and its vicinity as well as a Village map replica. Tables were packed with information free for all and with an ample information brochure edited by Michael Brüne which he created especially for this day. Attached to a Village signpost was a tray containing welcoming words by Michael Brüne and Arno Baumgärtel, the latter running the German website. 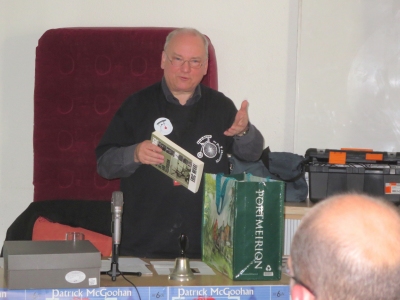 Inside the hall a huge Rover balloon was dangling from the ceiling, thereunder tables offering further leaflets, books and paraphernalia of the series (though far less than at the previous events). A canopied display rack was showing old TV magazine cuttings and, among others, two "Tally Ho" replicas from the series. Alongside the windows to the left a long array of display posters informed people about the wide variety of German language differences compared to the original which have come to be known as the „Brinkmann injections“. Some of them rather sophisticated as heard in the opening dialogue where there is no English "village" any more, replaced instead with rather vague, sometimes intangible references like "place", "here", "our community“ (in re-translation) and so on. In Michael's later report on Brinkmann this would become one of his subjects.

Towards the front of the room, next to the podium, No. 6 was waiting. To be true, it's a life-size cardboard cut-out that Patrick McGoohan would have hardly approved when he was still alive. But arguably, it's a real eye-catcher. This stand-up display would occasionally be placed behind self-crafted black „prison bars“! Probably, that's why the series was called THE PRISONER...

The "Touring Theatre" group led and directed by Jürgen Staeder was on the event agenda. The event day was interspersed with the group's performances and they did it very much to the pleasure of those in attendance. The plot was about an attempted escape bid but with a real twist. None of the actors had previously been on stage let alone for something like NUMMER 6. Bravo! 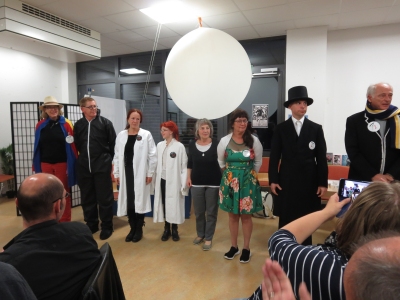 Lotus or Caterham Super Seven owners and drivers had been invited to present their cars to people. But it was only Andreas Seydell, chairman of the German Caterham Car Club, who made his way to the venue. In bright sunshine he was welcomed, his car well photographed and he received a little gift. 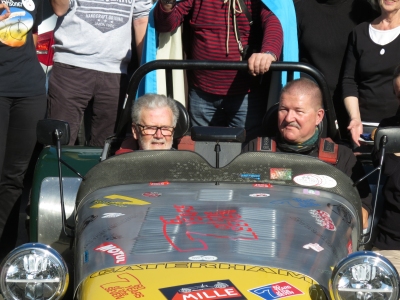 Next up was Michael Brüne's recount on Joachim Brinkmann, the late dubbing director of the 1969 version. Brinkmann passed away in 2015. Before that he would never give interviews about his work only saying he'd lost his recollection of it, however, he remembered it had been something outstanding. Brinkmann's widow Alice kindly met and telephoned with Michael. She revealed a little more about her husband's personality but she had one little to say about his work on this series. An "escaped philosopher" he was, she told Michael. We're convinced it transpires through his dubbing work on NUMMER 6. He has left this remarkable, far-reaching translation of the opening dialogue:
Where am I? - In the Village.
Wo bin ich? - Sie sind da.
Unfortunately, it appears no documents or notes of his work have survived. On his tomb Mrs. Brinmann had an inscription made citing her husband: "Wir bleiben verbunden." Which in translation almost equals that famous Village salut: "Be seeing you!" - "We'll stay connected." Thank you!

Manfred Brandt of Hamburg would then tell about his own PRISONER-related activities in the early 1990s. He was an organiser of episode screenings and NUMMER 6 parties well into 1997 or 98 and he created wonderful sets of invitation cards for them. He also went to Portmeirion together with friends of his.

A sad demise happened only days before the event. Bernd Rumpf, a German dubbing artist and dubbing director himself, passed away on Oct. 1st after a long illness. Everyone was looking forward to meeting each other but finally he wasn't able to make it. Bernd took over the dubbing of Patrick McGoohan's No. 6 in four episodes in 2010 that had previously not been dubbed into German (Free For All, The Schizoid Man, A Change of Mind, Living In Harmony) thus being the successor of Horst Naumann who was Patrick's German voice in 1969. Michael commemorated him and his work. Originally Dave Barrie, founder of the PRISONER Appreciation Society Six of One was to be the special guest. However, his physical condition did not allow him to travel to Germany and Dave has been struggling with his decision for quite some time. So, eventually questions were submitted and his greetings and answers were recorded on video; special thanks here go to Helen Percicoe and Alan Kent. Marc Christiansen did the video editing from the original 50 to 20 minutes which was shown on the screen. The complete Q&As will be made available at a later date.

Alan N. Shapiro was the first guest of the day. Born in New York City he started working as a software engineer. Later he moved to Europe where he has been living for over 20 years. He is a resident of nearby Frankfurt. Alan is a scholar, a media scientist and a social philosopher who teaches at art universities in Germany and Europe. He's also a dedicated PRISONER fan of which he says: "I believe THE PRISONER is the most intelligent TV series that has ever been made."

Alan was invited in order to speak about "THE PRISONER at present", contemporary issues. The 45 minute lecture held in German was about his hypothesis of "THE PRISONER" as 'The Hostage' and the episode "A. B. and C." A challenging excursion for some, a venture into the (SF) technology of that episode as well as into sociological ramifications that all this entails, based on the writings and media studies of French philosopher Jean Baudrillard (1929 - 2007). Alan's more extended English text version is available on his internet blog. As a side remark only: Kathryn Bigelow's film "Strange Days" (1995) depicts exactly what "A. B. and C.“, in a rather pedestrian way, is all about. Eric Mival is well known to fans of THE PRISONER. Eric, now being 80, is a very amiable man. Having been suggested by Dave Barrie he agreed to come to Germany to join "nr6de" on their own anniversary event. To his advantage, he has some German knowledge too. After Eric was introduced to the audience talks would immediately focus on his participation in the series, when and how he got involved and his aquaintance with Patrick McGoohan. One of the most memorable things that people would learn from his experience was that many of his decisions, where to use which piece of music, was made out of intuition, not according to a plan. As previously put at the convention, Arno asked Eric about the use of the Beatles' song "All You Need is Love" in the final episode and in particular whether Patrick, who had brought the song into play, could have chosen it because of the significant beginning with the "Marseillaise" as the intro, the French national anthem – and the "Fall Out" action being a trial, a tribunal of sorts. Eric, however, clearly denies such motivations.

After another intermission and the next theatrical act by the "Touring Theatre" it was time for a discussion panel called "Council Chamber". Eric, Alan, Arno and Michael were sitting on – no: in front of the podium and with the participation of audience members a number of interesting questions were asked and answered, partly in German, partly in English. 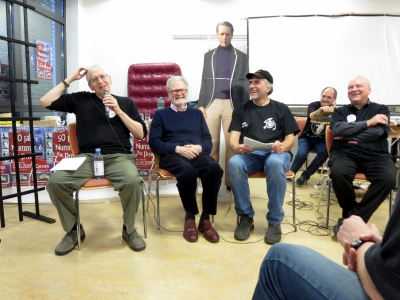 This was followed by the theatre group's final performance with a grand parade that went outside the hall and back. A tight schedule on this day, but everything was running smoothly. What a profitable day! Wir sehen uns! 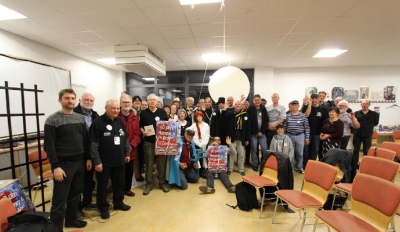