The Unmutual Reviews: "Peter Wyngarde - A Life Amongst Strangers" by Tina Wyngarde-Hopkins 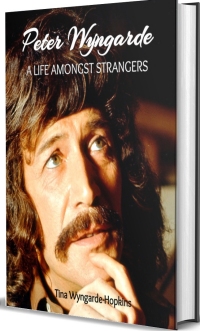 Few actors transcend their craft to be regarded as enigmas in their own right, but one such individual was the uniquely talented actor Peter Wyngarde, who whilst best remembered for his portrayal of crimebusting author Jason King in the ITC series' 'Department S' and 'Jason King', will also be fondly recalled as Number Two in the 'Prisoner' episode 'Checkmate'.

'A Life Amongst Strangers' is the first authorised biography of Peter. It is written by Peter's friend, companion, and organiser of his official fan club, Tina Wyngarde-Hopkins (read the book to find out how she came to take his name). It's an in-depth, fascinating, and touching portrayal of one of ITC's best-loved personalities.

The first half of the book is a straight-forward biography of his life and career, and the second half a personal memoir of Tina as she describes the years, in an amazingly frank fashion, she spent with Peter. 'The Prisoner' is of course covered, and it's lovely to read several quotes from Peter about working with the series and Patrick McGoohan. I couldn't think of a notable appearance of Peter's during this 'golden age of TV' not covered, and it all made for fascinating reading, with countless quotes from Peter, and others.

The research the author has put into the career aspects of the book is quite astonishing. I am by no means an expert in Peter's life and/or career, so I cannot vouch for the accuracy of each and every statement, but every aspect of his life which is discussed (yes, even those moments are covered!) has obviously been meticulously researched, as there are countless sources and documentation referred to and referenced throughout. If you felt you knew 'the truth' about Peter, this will make you think again.

After the look at his early life and career, we move into more recent times, and Tina's personal story. It was a sad day for fans of classic TV and film when, in January 2018, Peter passed away, far too soon, after a short illness. The news was announced by Peter's agent, Thomas Bowington, who had been with both Peter and Tina when he drew his last breath, and this event, and the weeks leading up to it, are covered in-depth in the final chapters of the book. I found this last part of the book difficult to read (not because it was bad, but because it was so 'heartbreaking' and touching to read (so how it must have been to actually experience the events described I can't begin to fathom)).

The only criticism (although, this could also be seen as a positive, depending on your point of view) is that perhaps the book at times becomes a little too personal, and whilst I trust the author and their sources, perhaps some opinions about some of the folk and events would have been better off not said. But then again, the author did not want a whitewash, or any stone unturned, so in that respect, it is a case of 'job done'.

As I mentioned above, the research with regards to his career really is phenomenal, and the author has overall done Peter proud and I would thoroughly recommend this book. Do I now have a deeper knowledge of Peter's careeer, and greater understanding of how life had shaped how he was? Definitely. Do I feel, having read it, that I know Peter Wyngarde? Probably not, but that's just the way he would have wanted it.