AN INTERVIEW WITH ALISTAIR SADGITT

Over the years, "The Prisoner" has attracted many fans whose opinions on the series have given us fascinating insights into the complexities of the themes within the show.

But we couldn't get hold of any of them, so here's an interview with Alistair Sadgitt instead.... 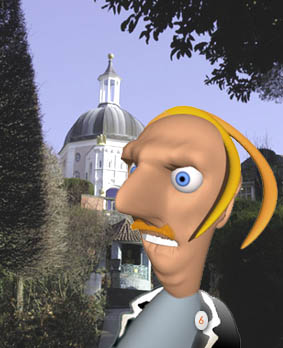 DO YOU REMEMBER WATCHING THE PRISONER FOR THE FIRST TIME?

AS: Oh yes. (Laughs). Those many years ago. I remember my Dad clicking through the channels when this enormous white sphere popped up. Well, I was amazed! Dad changed channels to watch something on the BBC but I was shouting "Wanna see big balloon! Wanna see big balloon!" and having a real tantrum. I threatened to hold my breath until I was blue in the face and Dad relented and let me watch it.

THATS A CUTE STORY. HOW OLD WERE YOU AT THE TIME?

ER...RIGHT. YOUVE WATCHED THE SERIES MANY TIMES OVER THE YEARS. WHAT THEORIES DO YOU HAVE ABOUT ITS INTRIGUING PREMISE?

AS: It was about a big balloon chasing a man.

AHEM. MOVING ON. YOU WERE ONE OF THE FIRST PEOPLE TO JOIN SIX OF ONE I BELIEVE?

AS: I would have been, had the post office been more efficient.

THEY LOST YOUR SUBSCRIPTION?

AS: No, they lost me. I posted myself in a parcel to the society but I was redirected and spent three weeks at the back of a sorting office in Barnsley. Apparently the address was badly written. Hah! YOU try writing on a parcel when only your fingertips are peeking through the wrapping. Its nigh impossible, as everyone who's tried it will attest.

IM SURE IM GOING TO REGRET ASKING THIS, BUT WHY DIDNT YOU JUST BURST OUT OF THE PARCEL AND GO HOME?

AS: Wearing nothing but a school scarf and a straw boater? Are you mad?

ERM...TELL US ABOUT YOUR FIRST VISIT TO PORTMEIRION.

AS: Ah yes. I'd intended to arrive in true Prisoner style.

WEARING A PIPED BLAZER AND DECK SHOES I PRESUME?

AS: No, gassed and in the back of a hearse. Unfortunately, my Mum said I had to make do with three cups of Horlicks and a lift in my Uncle's ice cream van instead.

SO YOU ARRIVED IN THE VILLAGE HALF ASLEEP, IF NOT UNCONSCIOUS?

AS: No. The van got stuck behind a tractor for ten miles on one of those B roads and the Horlicks had worn off by the time I arrived.

WHAT WAS YOUR FIRST IMPRESSION OF PORTMEIRION?

AS: Quite frankly, I was disgusted at how standards had been allowed to slide since the series was filmed there in 1967.

AH, YOU MEAN THE EEC LAWS WHICH HAVE NECESSITATED INTRUSIVE SAFETY PROCEDURES?

AS: No, I mean that tree at the back of Government House which is clearly a few feet higher than it was in 1967! How can one possibly have an accurate re-enactment if nature itself is opposing our important work?

MANY MEMBERS HAVE LEFT THE SOCIETY DURING THE PAST TWO YEARS. ARE YOU STILL SUPPORTING SIX OF ONE?

AS: Of course! These negative troublemakers who have left should realise that there are more important things in life than having integrity and making sound moral judgments! After all, one can live without principles, but can one live without a quarterly black and white magazine telling us how hard working the coordinators are?

AS: And what about all the events that those hard working volunteers put on for us members?

DON'T THE ACTIONS OF RECENT COORDINATORS GO AGAINST THE MAIN PRINCIPLES OF THE SERIES? THAT OF CONDEMNING SOCIAL CONTROL AND COVERT SURVEILLANCE?

AS: Poppycock! Next youll be saying that scoundrel Number Six was the hero of the series instead of Number Two and his hard working team! I think you've missed the whole point of The Prisoner, young man!