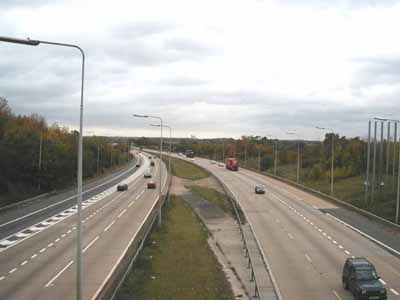 IN THE PRISONER: In "Do Not Forsake Me Oh My Darling", Number Six drives to Dover on the A20, followed by Potter. In "Fall Out", following their escape, the truck is seen driving alongside a businessman in a car with Number Six and friends dancing to "Dem Bones". The truck then stops, and Number 48 alights. Later in the episode, Number 48 is seen on the other side of the carriageway attempting to hitch a lift.

IN REALITY: Although the sequences in question were representing the A20 in Kent, the road used for filming was the A1 at Borehamwood. This location in Hertfordshire was near to the MGM studios in Borehamwood where much of the series was filmed.