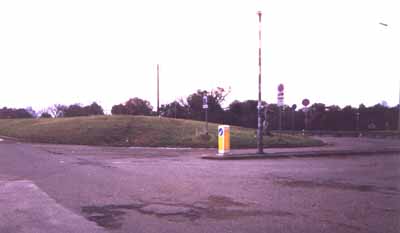 IN THE PRISONER: In "Do Not Forsake Me Oh My Darling", Number Six drives to Dover on the A20, followed by Potter, and at one point drives part way round a roundabout.

IN REALITY: The road they are travelling on is the A1 at Borehamwood (doubling for the A20). This location is the A41 Roundabout at Elstree, and Number Six's Lotus is seen driving round the roundabout. This location, in Hertfordshire, was near to the MGM studios in Borehamwood where much of the series was filmed.