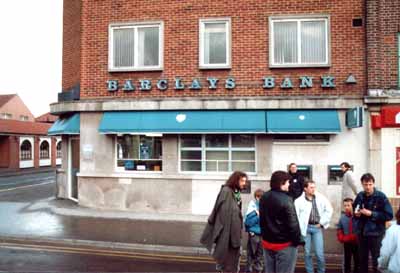 IN THE PRISONER: In "The Girl Who Was Death", Number Six walks past a bank after the exploding cricket ball murder on his way to meet Potter. It can also be seen in the background as he has his shoes shined during the meeting.

IN REALITY: This is Barclay's Bank, Shenley Road, Borehamwood. This location in Hertfordshire was near to the MGM studios in Borehamwood where much of the series was filmed. In the photos, Prisoner fans Julie Jones, Lew Stringer, Joanne Healey and Bill Colquhoun along with Jane Rawson can be seen loitering with intent. 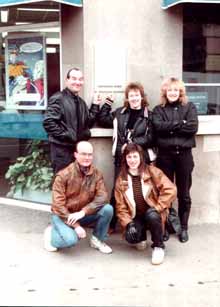 Click here to return to the Unmutual Locations Gallery