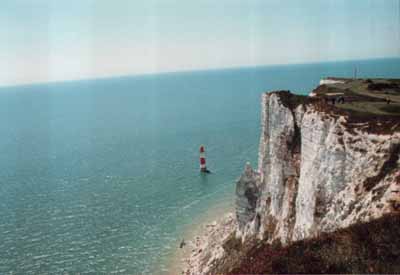 IN THE PRISONER: In "Many Happy Returns", Number Six awakens on a beach and climbs a cliff, overlooking a lighthouse. In "The Girl Who Was Death", Number Six follows Death to the interior of a rocket, destined for London, which is disguised as a lighthouse. The lighthouse also appears as a slide in "Do Not Forsake Me Oh My Darling".

IN REALITY: This is Beachy Head Lighthouse, off the South coast of England.

LOCATION REPORT: For the fantasy episode "The Girl Who Was Death" a wide range of unique locations were used. The spectacular and rather dangerous location of Beachy Head, and more specifically the famous red and white striped lighthouse, was featured with the distinctive building doubling as Schnipps' rocket that was to be launched against London. It was of course blown up in the episode - or at least a special effects model of it was!

The building has had something of a charmed life since that time the with regular coastal erosion of the chalk cliffs occasionally coming a little too close for comfort. It faced real life danger in January 1999 when when thousands of tons of cliff face collapsed into the sea effectively joining the base of the lighthouse to the Sussex mainland. The astonished crew of a lifeboat operating three miles off the coast spotted the incident, which was reportedly the largest single loss of British coastline in living memory. A stretch of cliffface 200 yards wide and up to 50 yards deep crashed into the sea effectively blocking the channel between the cliff and the lighthouse used by tourist boat trips to view the impressive coastline and the unmanned lighthouse (see bottom-right photo). 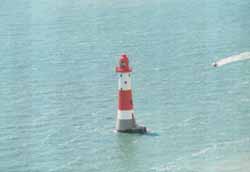 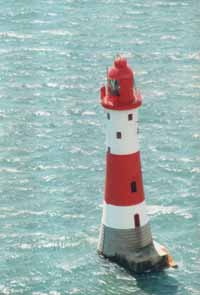 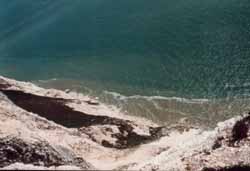