**NEWSFLASH: THIS LOCATION IS UNDER THREAT OF DEMOLITION, VISIT HTTP://WWW.SAVETHECOLISEUM.COM FOR MORE DETAILS** 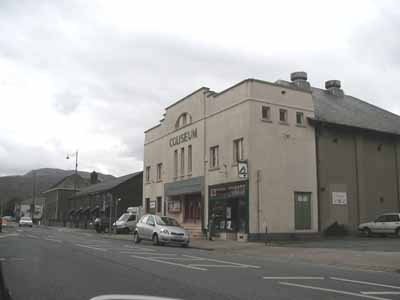 The Coliseum cinema in Porthmadog was opened in 1931, and Bob Piercy had been projectionist there since 1939. He remembers how “Prisoner” producer David Tomblin contacted the cinema’s owners (Paramount of Welshpool) to arrange for its hire for the screening of the rushes of the filming of the original location filming in Portmeirion ("rushes" are the days filming/scenes).

That was the first that Bob had heard about “The Prisoner”. The crew visited the Coliseum every night, including weekends, for four weeks in September 1966, and then again for two weeks on the second Portmeirion shoot in March 1967.

The unprocessed film would be picked up from Portmeirion by a local taxi firm and driven to Bangor, from where it went to London to be developed. Then the taxi firm would collect the processed film next day from either Bangor or Shrewsbury stations and rush it direct to the cinema for the nightly screenings.

Said Bob: “All the crew would sit at the front and watch the filming of the day before. Sometimes the local extras would come in to watch, but I don’t know whether they enjoyed it. There was no soundtrack, you see, just vision only. Each day’s filming was usually about five to eight minutes long. When it had finished, someone would shout from the front ‘run that through again’ and I’d re-thread the projector and off we’d go.

“They would sometimes watch it seven or eight times, and it would take anywhere between 15 minutes and 2 hours. We used to start at about 10pm and that meant that sometimes we wouldn’t be out until after midnight.

“Patrick McGoohan would sometimes nip out to the pub. He’d bring little Angelo Muscat up to the projector room and say ‘Can I leave him here?’ and he would sit on a high-chair looking out of the hole at the film!”

Bob recalls that each cannister of film arrived back from London with a piece of sticky tape round them saying “Funeral Scene” or whatever, and he used to take each piece of tape off and stick them on the wall of the projection room “as a souvenir”. They were still there until the end of the 1980s, when they all mysteriously disappeared.

Many well-known local characters appeared as extras, said Bob. “They picked some good people. One of them, Tecwyn Williams, was a great fellow”, he said, “His job was to recover the balloons when they went astray, and he got wet through running into the sea after them! My son was an extra, doubling for McGoohan in one scene. They were good wages too”.

For Bob, the highlight of the Coliseum’s “Prisoner” connection was the night when Sir Clough Williams Ellis arranged a preview of the first episode, “Arrival”.

Bob said: “Clough sent out invitations to all his friends – doctors, high sheriffs, even the Chief Constable of Caernarvon. David Tomblin came as well. Clough had been sent a 35mm print, and the preview was to take place on a Sunday evening.

“However, at that time, we only had six-day licenses. We weren’t allowed to show films on a Sunday! But we went ahead anyway – and the place was full. It was a great success, and that was the first showing of “The Prisoner” anywhere.

“I remember that I had a note inside the film canister saying something like ‘Don’t scratch this print as it is the only copy’. I had to clean the projector first and put vaseline on all the moving parts. I was quite worried!”

And what are Bob’s recollections of Patrick McGoohan?

During the late 1980s and early 1990s, Bob Piercy would again act as projectionist for “The Prisoner” at the Coliseum when Dave and Julie Jones organised “Prisoner” screenings. The 1-screen Cinema still stands today, and is found in Porthmadoc opposite the Railway Station, although in recent times the cinema has closed (see below). Bob sadly passed away on March 11th 1993. 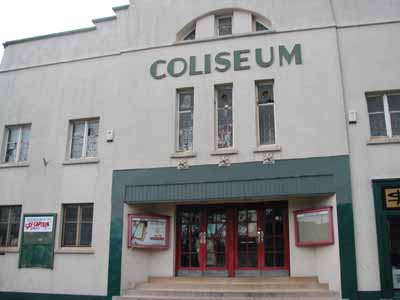 Sadly, more recent times have seen the Coliseum fall into disrepair as the current owners have sold the site preferring it to be demolished rather than see it be used to benefit local people. A "Save The Coliseum" campaign, which The Unmutual Website has donated to, has sadly proved so far unsuccessful (see TUW's news pages for more information and HTTP://WWW.SAVETHECOLISEUM.COM). The photo below from Robert Brown shows the site in January 2015. 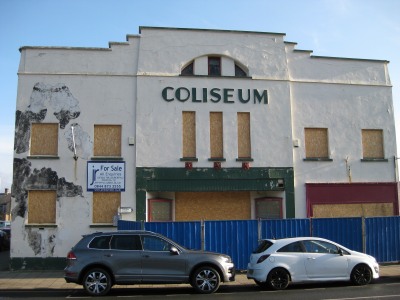