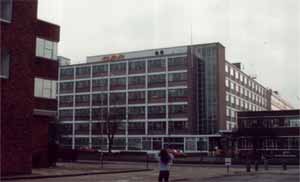 IN THE PRISONER: This location features in the episode "Do Not Forsake Me Oh My Darling" and represents the interior of the offices of Number Six's bosses. After Number Six (Nigel Stock) convinces his former colleagues that he might be who he says he is, he and Villiers (James Bree) take a ride in the Paternoster Lift and, upon disembarking, are allowed through a set of double doors by Potter (Frederic Abbot). After a meeting with his boss, Sir Charles Portland (John Wentworth), Number Six travels in the lift a second time before returning home. The exterior of the building is not seen in the series.

IN REALITY: The building is GEC-Marconi Ltd, Elstree Way, Borehamwood - a Research Centre for Defence Software. Alas the Paternoster Lift was boarded up, never to be used again, in 2001.

LOCATION & PHOTO REPORT: On Saturday 2 February 1991 Steven Ricks, Kieron McAleer and Andrew Staton organised an event in Borehamwood called The Priz Conference. It included an exclusive visit to the GEC-Marconi Building, famous of course in Prisoner circles as the location of the paternoster lift filmed for use in the episode Do Not Forsake Me Oh My Darling.

Not only was access to this high security building obtained for the occasion - no mean task in view of the defence work carried out there - but those lucky few who attended were actually allowed to ride the lift itself. Those familiar with the concept will know that the contraption involves a continuously moving chain of open compartments that move slowly in a loop inside of the building without stopping, allowing passengers who are agile enough to step on or off at the appropriate floor.

Surprisingly the party were given a free run of the lift area (although they were requested to respect the security of the building). With special guest and guide James Bree (Villiers from the episode) the group had great fun hopping on and off the lifts and astonishingly, given their inexperience, managed to survive the experience without mishap.

The photos presented here show James Bree coolly demonstrating his prowess at stepping off the lift while a group of Prisoner fans (Dave and Julie Jones, Joanne Healey and Julie Jones, Bill Colquhoun and a beheaded Peter Dunn!) are seen gleefully riding. Lew Stringer, perhaps sensibly, appears to be checking out the situation before taking the plunge with Kate Foy, while ex Number Six editor Howard Foy appears traumatised by the experience!

Amazingly Lew, who is seen loitering outside of the restricted Microwave Defence Systems area, was not arrested, nor was the cameraman who I'm sure was not supposed to be taking photos of the Airborne Early Warning Radar area (authorised personnel only)!

Whilst the lift used in "The Prisoner", as mentioned above, is no longer in service, there are several working examples of Paternoster lifts throughout Europe, especially in Germany and Austria. However, there are also still examples in the UK, including one at Northwick Park Hospital in London, and at the University of Essex in Colchester, which is shown in the below photos kindly provided by Mitch Nozka. 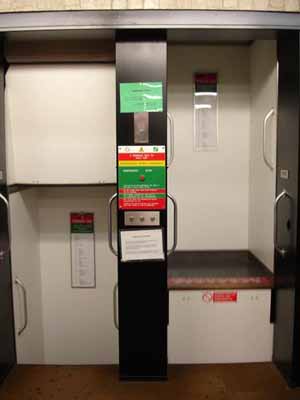 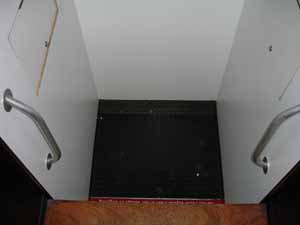 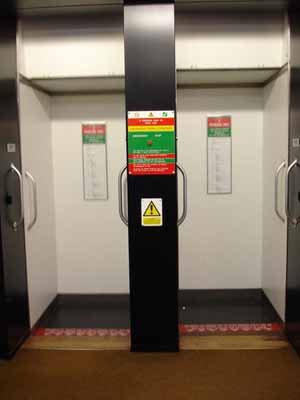 The building, and lift, was demolished completely in 2012 (image below). 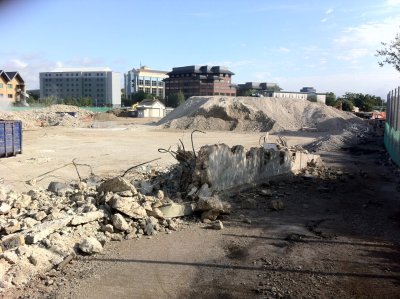 With additional thanks to Philip Lamdin and SR for the additional Lift information. More details on Paternoster lifts can be found HERE (thanks to Jill Mills for the link).You can find photos of working paternoster-lifts in Europe ("Fotoliste laufender Paternoster") and information about not working or demolished paternoster-lifts ("Stillgelegt/abgerissen") at the following Website: http://www.flemming-hamburg.de