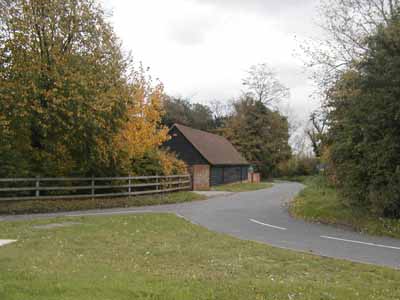 IN THE PRISONER: The last location seen in the car chase in "The Girl Who Was Death", immediately before the first scene in "Witchwood". Death's white Jaguar is seen hurtling round a bend, shortly followed by Number Six in his blue Lotus.

IN REALITY: The Junction of Harris Lane, Mimms Lane and Rectory Lane, Shenley, Hertfordshire, was near to the MGM studios in Borehamwood where much of the series (including the later "Witchwood" sequences) was filmed. The photo below (which is made up of 4 seperate images) represents the view seen as the camera pans round to follow the speeding cars round the bend. The view shown in the photo on the left is the last location seen on screen during the car chase.