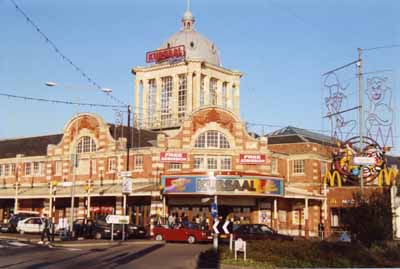 IN THE PRISONER: In "The Girl Who Was Death", Number Six follows Death to a busy funfair.

IN REALITY: The fairground sequences were jointly filmed at the Kursaal Funfair in Southend, and Battersea funfair, with brief shots from stock footage of the 1967 EXPO in Montreal, Canada.

The original Kursaal Funfair closed down in the late 1970s, and was re-built and re-opened in the late 1990s (see photo) but bears no resemblance to it's original appearance. Two books about the Battersea and Kursaal Funfairs have recently been published, and are available from http://www.joylandbooks.com. The Kursaal funfair can also be seen in the Morrissey pop video "Every day is like Sunday". Pathe footage which features the EXPO footage included in the episode is at https://www.youtube.com/watch?v=DEly-bm5eU0 (watch from 7.54). An episode of the 1950s series 'Look at Life' also features the Kursaal location, including footage of the 'wall of death'.