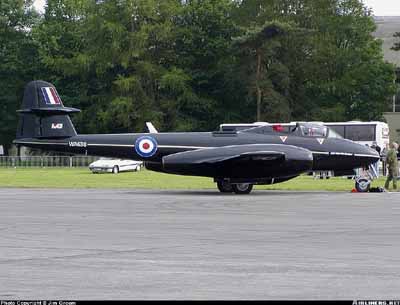 IN THE PRISONER: At the end of "Many Happy Returns", Number Six travels by Jet aircraft to search for The Village.

IN REALITY: This is a Gloster Meteor. The Meteor was a standard 1950s RAF jet-fighter. The footage used in the episode is of a Meteor 7 (with a Meteor 8 tail) and was one of only 2 remaining in the UK and was provided by ejector-seat manufacturers Martin-Baker, who still own and use the Meteor in question. The airfield scenes at the end of the Episode were filmed at Chalgrove Airfield, near Oxford, which is the private HQ of Martin-Baker's UK operations.

The ejector seat sequences show a different aircraft. The sequences were Martin Baker's own "stock footage" sequences of the ejector mechanism.

Classic Airframes produced a 1:43 scale kit of this aircraft (the T7 variant).

With thanks to James Groom - http://www.airliners.net for the image.