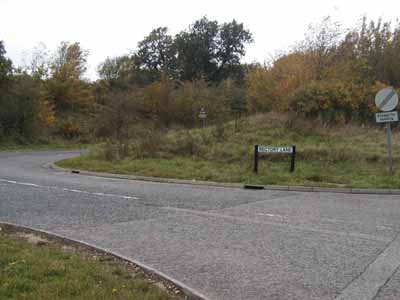 IN THE PRISONER: In the early part of the car chase in "The Girl Who Was Death", Death's white Jaguar, closely followed by Number Six's blue Lotus, are seen turning left (just after passing under a bridge on a dual carriageway).

IN REALITY: The dual carriageway is what used to be the A6 trunk Road, and the bridge they pass under is the A111 Junction Bridge. Both the bridge and the A6 are no more, as they were demolished and incoroprated into the M25 in the late 1980s.

The road they turn into is Rectory Lane, which comes off the B556 between Radlett and South Mimms (the B556 runs along the side of the M25 where the A6 once stood). This location in Hertfordshire was near to the MGM studios in Borehamwood where much of the series (including the later "Witchwood" sequences) was filmed.