The Unmutual Reviews: The Prisoner's Dilemma, by Jonathan Blum and Rupert Booth.
Review by Rick Davy. 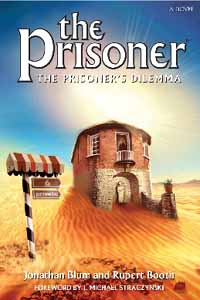 I've never been a fan of Prisoner fiction. The Stein, Disch and McDaniel penned books of the late 1960s failed miserably to encapsulate or replicate The Prisoner and it's lead character within their pages, and the Roger Langley offerings of the 1980s were totally void of any literary talent whatsoever.

It was therefore understandable that when, in 2003, The Unmutual website announced news that Powys Media were planning a series of 6 novels based on The Prisoner TV series, that my thoughts turned to those previous attempts. But I was prepared to wait and see. And hope.

The first of these books is "The Prisoner's Dilemma", by award winning SF author Jonathan Blum, and UK-based comedy writer Rupert Booth, with a foreward by Babylon 5's J. Michael Straczynski, and is being launched in March 2005, priced at $14.99 in the US and £9.99 in the UK (full ordering details at http://www.powysmedia.com). Good pedigree.

In the course of promoting the book on The Unmutual Website I swapped several emails with the authors, and was delighted to receive an emailed review copy of the book's manuscript. I then sat down to read.

The volume gets off to a good start with its cover (shown left). The artwork, by Allan Bednar and designed by Rob Fairclough, is both striking and different and certainly makes you feel confident with the thought that may have gone into the book. However, can one judge a book by it's cover?

The first few pages are standard Prisoner novel-type fayre. The opening sequence is written in prose, and the Village scene and the Number Six character are set up in a familiar way for the reader. At this early stage I was thinking, "so what's new?". Then the following line appeared:

"And over it, the cheery lilt of the announcer, a woman who must by now be quite, quite mad".

and, a few paragraphs later;

"And this is a special message for Number 156. The umbrella you've just picked up belongs to Number 62, please put it back immediately".

The majority of the writing contained in the first 50 or so pages is fast-paced and absorbing. A murder and an interrogation come and go (including a wonderfully-bizarre moment from a descending stenographer which would have fitted superbly into any episode of the series) before a band of hippie-like rebels called the "Irrationals" appear. Hmm. Are we about to see Fall Out's Number 48 make an appearance I wondered? My question was answered.

"Let's get Number 48 on board, he'd be well up for this". The room fell silent. X looks at the offender, who visibly shrinks in size. "Nah, he's just too weird".

It was clear from this that this wasn't going to be an ordinary Prisoner novel. Humour is the very essence of a decent book.

But what of the story itself? Without wanting to give away the plot, i'll keep my synopsis of the action brief. A murder in The Village. An ally. A villain. A Village system, called Juliet, which must be destroyed. An underground movement of rebels, a minister 6 once knew, a scientist, a General. A test of character that Number Six must pass, but doesn't know why. A raft, a jungle, a bomb, a deal, a funeral, a war. No weddings.

This is where "The Prisoner's Dilemma" excels where other Prisoner novels didn't. It isn't afraid to keep the action moving. Barely a page goes by without a change of pace or a new scene to take in. But a book needs to have its action bound together, and this is perhaps the book's greatest plus point. There is not one central theme, but several - all relevant to the The Prisoner, but previously largely unexplored within the series.

The main themes - the cult of Celebrity, Mass-media, information technology, "Big Brother" Society, and terrorism, are all dealt with extremely well and whilst we might think of these as modern themes, and perhaps easy for the writers to explore, it's not so easy in practice to inject these into the Village setting, but somehow Blum and Booth manage to do just that.

The characters are all believable Village characters which would have sat well in any Prisoner episode, with the Minister and Number Two (one word: "Salad") being particularly well written. Number 18 and Number 54 to my mind suffer too much from being created by 21st Century authors, in that their parlance is perhaps at times too modern and "un-Prisoner-like". I'll save my best comments for "The Irrationals". Very sixties, very fitting, very believable, and at times very, very funny.

One criticism sometimes levelled at The Prisoner TV series is that some of its aspects are not greater explored. What do they show on the Village TV station? Who are (or were) these Villagers? What goes on behind the scenes of the "Tally Ho", or the Village magazine? Although they sometimes don't quite get away with it, Blum and Booth have dared to give all these a go - rather than simply copy aspects of the series which have already been explored - and should be applauded, even though, at times, events become a little too daft ("The Number 42s" were a step too far, gents).

Does the book even feel like something that can be termed as "Prisoner"? Sure. There are echoes of "The General" throughout the book, with Professor and Colin Gordon type characters. Additional references borrowed from "A Change of Mind", "Do Not Forsake", and "Living in Harmony", "The Truman Show" and even "A Bit of Fry and Laurie", serve as nice homages but what ultimately sets this book apart from the ones at the top of this review is that it's different enough to be new, but familiar enough to be acceptable.

I can see how some might criticise some aspects of the book, as I found myself doing at times, and would level the accusation that the setting doesn't feel like The Village. "Number Six wouldn't trust a woman", I asked. Watch "Chimes of Big Ben", I answered. "You can't just invent an aspect of the Village not seen before or since". Watch "A Change of Mind". "Where did all these Prisoners come from?" Watch "Checkmate". Almost every criticism that one could throw at the book can be defended and answered by the series itself. Except one.

Could this book triumph where all previous attempts had failed in terms of accurately replicating the Number Six / McGoohan character? Could it pass the most important test of such a novel? Not quite.

When reading about a character called Number Six, one can't help but picture McGoohan uttering the lines, or performing the actions, and whilst this is the fault of this reviewer, the authors have to accept that in setting the book during the TV series, with McGoohan's Prisoner the lead character, most people reading the book will be doing the same. And this is perhaps the book's one failing, despite at times a damn good effort by the writers.

When the story demanded some sharp-witted conversations between the well-crafted and believable Number Two character and Number Six, the authors get McGoohan off to a tee:

‘As the lion-keeper said to the Christians.’
‘The public wants their grand narratives,’ says Number 2. ‘Their epic tales that give them meaning. Characters they can identify with.’
‘You mean the lions?’
‘I mean the hero.’
‘Your hero.’
‘The individual out for himself.’
‘Standing for nothing.’
‘The starring part everyone wants.’
‘I won’t play it.’
‘We’ll tell them you do.’
‘I won’t play at all.’
‘Then the game goes on around you.’

However, the story itself demands more from its lead character than just short bursts of individualism and bravado, and I found some of Number Six's longer bursts of dialogue and a few actions rather out of character (no matter how hard I try I just can't imagine McGoohan's Number Six character talking about "Roadrunner" cartoons, playing croquet, or birdwatching (indeed, McGoohan rejected a script for the original series stating "heroes don't go birdwatching")).

After a while I mentally changed from thinking of Number Six as McGoohan but as a "generic" Prisoner. This makes the book a more enjoyable read, in my opinion, but does this mean the authors have ultimately failed? Possibly, but not as far as I am concerned. "The Prisoner's Dilemma" isn't an additional episode fitting perfectly into "The Prisoner", but it doesn't have to be. It isn't an indispensible aspect of the "Prisoner" opus alongside such greats as "Free For All" or "Checkmate", but it was never meant to be. It isn't a perfect example of McGoohanesque dialogue. That would be impossible.

What it is is a very good read. The themes explored are brave, without being reckless. The writing includes humour, without lampooning the series. The approach is daring, without being arrogant. It references the series, without ripping it off. It's fast-paced, without getting sidetracked. And, perhaps most importantly, it dares to be different without being ridiculous.

Put simply, "The Prisoner's Dilemma" is the most enjoyable piece of Prisoner fiction this reviewer has ever read. The fact that the competition wasn't up to much needn't matter.

**CLICK HERE FOR AN EXCLUSIVE WEB INTERVIEW WITH THE AUTHORS!**