IN THE PRISONER: These flats are Number Six's last view of London, from his home, before his abduction to The Village. They feature at the end of the opening title sequence, and briefly in "Many Happy Returns" (when Number Six returns to London) and "Do Not Forsake Me Oh My Darling" (when Number Six awakens and looks out of the window).

IN REALITY: These flats are located at Stag Place, London, SW1 and overlook Number Six's London home in Buckingham Place, as they do in the series. Although some are still flat-dwellings, most of these buildings are now used as offices. The view of the flats was actually filmed from the upstairs window of Number Six's House, and not downstairs as suggested in the series. This location forms part of the twice-yearly Prisoner Location Walkabouts (details on our events page). 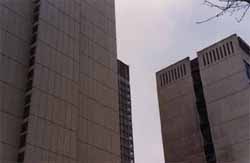 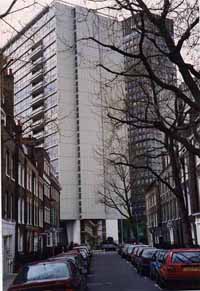